The drive to Red Mountain, which is on the ouskirts of Rossland, which is virtually one with Trail, was a pretty short one. I arrived well before lunch, having left Salmo early with the thought of maybe skiing Red that day. But I arrived to heavy clouds/fog, and a better forecast for tomorrow. I had wanted the Monday open to do a couple RV things in Trail, but skiing conditions won out, as they should really. The day spent waiting would be a comfortable one at least, as Red has RV spots right at the base area for $10 a night, including power. The best (official) deal I’ve seen so far.

The next morning showed I had made the right decision. A trace of new snow and threatening blue sky with high clouds was a welcome change to the day before. I hurried to meet the hosts as their first tour starts at an unusually early 9am. Given that Red isn’t a particularly large resort, I should be happy that there are orientation tours at all. Red has an interesting option on the orientation tour docket: a ski instructor will be your guide all day long, taking you into whatever kind of terrain you want, for $99. If you are a high end skier with not much time to learn the mountain, this is a pretty good way to go. I would be tempted except I’m already way over budget on this trip, and checking out the mountain host programs on other hills is an interesting side-goal for me.

I was particularly happy with my host however, as it turned out he spent some of his time helping keep the town museum going, and I loves me a bit of local history. Andy had lived in the area most of his life too, which helped. First I got a lesson in how the town (Trail specifically) started, which is a topic I love. For anyone who has ever heard of Trail, they’ll not be surprised to find out it is the result of mining. which continues in grand scale today. Red Mountain itself is heavy in mine history… including physical history, as the small original hill that started the ski area has over 100km of mining tunnels running through it. Red mountain’s colour is the result of iron in the exposed rocks, and prospectors found plenty of gold in there back many years ago. How most of the shafts are collapsed or closed off of course, but I did get to peak into one easily accessible number, which is known for getting stalagmites of ice in the winter (sadly not this day as it was too warm). I was fortunate enough to see this cave, as I ran into a local ski tour guide who offered to take me there.

There is another surviving mine shaft, in the form of a vent shaft. Normally this presents a significant danger as someone could fall in, but an opportunistic local who built a cabin on Red many years ago build an outhouse over it. He won’t have to call the pump truck to clean out his pit anytime soon. This wasn’t the only cabin on the property. There are several old cabins, predating the resort, within the ski area. One even owns the 40 acres of land around the cabin and is the only one not under the cloud of their cabin not being rebuildable in the case of a fire. They cannot reno either, except for the one land owner. Never thought I’d see a privately owned [property within a ski area. The cabins being forcibly original, the feeling of history was very near. And very cool, if you ask me.

Visible history continues with the old double chair going up Red (which my guide actually helped build as part of the fire department that helped lay the tower foundations all those years ago), which has an almost art deco look to the bottom station. One of the 2 triple chairs held some closer history for me, as it came from Whistler some years ago. While the main day lodge is quite new, a cluster of the base area buildings are decidedly original looking. Passing through the town of Rossland on the way up provides yet more historical eye candy with a main street that looks largely unchanged since inception (or at least, since the last fire took it all out).

The history books have special mention of Red as well. I’m told it held the first ever World Cup race in Canada, and of course it is the hometown of Canadian sporting legend Nancy Green and her siblings. With credentials like that, I expected a pretty big race program here, but surprisingly not so. Likely a victim of mountains with more reliable elevations opening in the (extended) region, not alot of nearby population, and the main town, Trail, has an unusually old average demographic. Not alot of kids to train here.

Like most of the resorts I have been to, especially the smaller ones, there is a good helping of history in its people too. Ski resorts seem to attract alot of retirees, albeit exceptionally active and fit ones. On my predominately weekday visits I often find a near majority of retired folks skiing (and often hosting) and socializing. “Oh hi Judy/Bill!” will ring out frequently as you pass someone or see them from the lift. For a sport with such a young image, retired participants seem to make up a pretty significant chunk of skier visits, especially with so many skiing near daily. It is definitely an in spiring thing to see, and I can only hope my kness and hips hold out long enough for me to join their ranks one day (ski the winter, RV the summer… sounds like a good life to me).

Now, the terrain. No significant alpine here as Rossland’s elevation is definitely on the low side. This has, I’m told, made this season in particular difficult for them, but this day they were doing pretty well for snowbase. Like pretty much everyone on this continent this season, they could still use more though, and they definitely were due for a fresh dump as it had been a week or more since anything more than an inch fell. The grooming was very good in most places though, and especially as the day worn on and warmed up plus dropped a couple centimeters, some of the offpiste became enjoyable too. There is plenty of both here with 1700 acres. I didn’t come across any particularly extreme terrain, but there are alot of good trees and cleared steeps so no getting bored here. I didn’t get to quite as much of the back bowl as I would have liked due to conditions and the trade-off to spend more time soaking up history rather than steeps. The trees once again are plentiful and well spaced, though I’m not sure how much of the glading has been shaped by the hand of man on this hill. The terrain layout is interesting. The namesake and original Red Mountain is fairly small, some 1300ft of vertical, and the developed side is predominantly facing the base area. Newer Granite Mountain provides most of the 2900ft of vertical, and it developed on all sides. It is also home to the majority of the original cabins (not that there are many).

As seems to happen so often, it started snowing pretty decently towards the end of the afternoon, with the thick cloud and limited visibility accompanying it, but as soon as I got off the hill, the skies parted and the tail end of the sun came out. I’m not sure what causes this seemingly cynical weather pattern but it is something I see very frequently back home at Whistler too. It really does feel like Mother Nature is hatin’ on ya.

Speaking of Whistler, how do they compare? Again the comparison is not very valid. While Red does have some slopeside accommodation, the facilities are fairly basic, including the lifts. Not that Red is really a local ski area either. They do get their share of destination visitors, and things like the full time Mountain Host program are certainly geared toward tourists. The terrain at Red is well varied other than the lacking alpine, but certainly doesn’t offer quite the selection. However, it does quite well with its 1700 acres. The 360 degree facets of Granite provide plenty of opportunities to see something new and different. Red is certainly worth a visit, especially so if you dig a bit of history with your skiing like I do.

Thanks to Red’s fabulous RV accommodation offer, I stayed put for the night, watching the ski clear right up and the temperature drop. Skiers the next day would look to have a good time in store, adding another day to the history of Red. 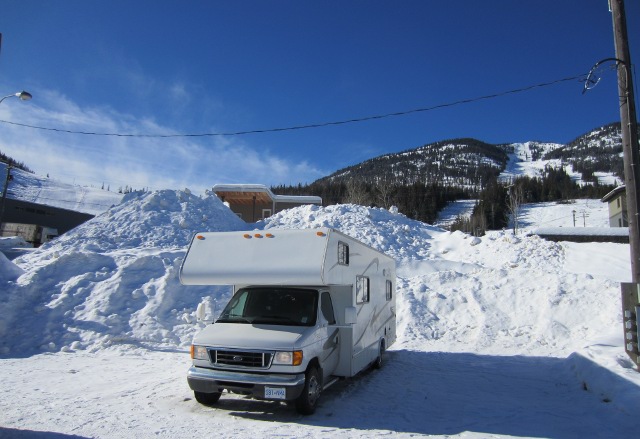 Parked the RV all of 100 ft from the slopes, with power to boot.

The base area at Red, some 60 seconds' stroll from my accommodations. Click to view. 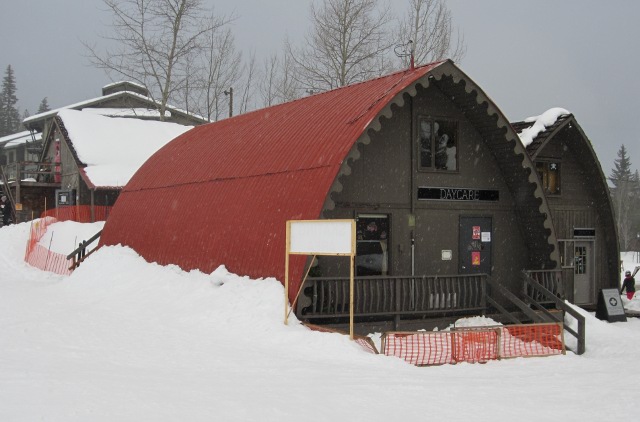 While the main daylodge appears new and is decidedly modern, Red has a strong sense of history with some original looking facilities. 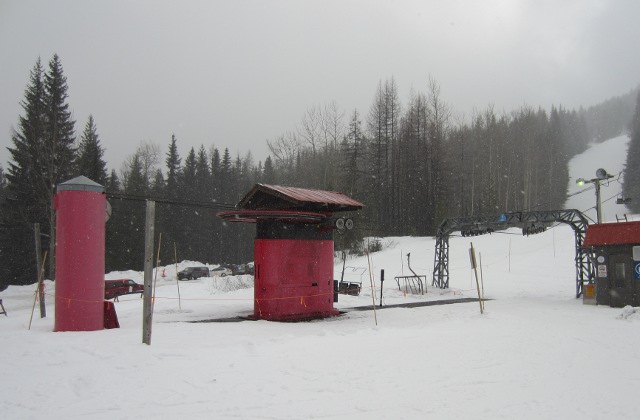 The only lift I have ever seen whose designers paid attention to aesthetics. It doesn't come through well in the photo unfortunately, but there was something decidedly Art Deco about it. 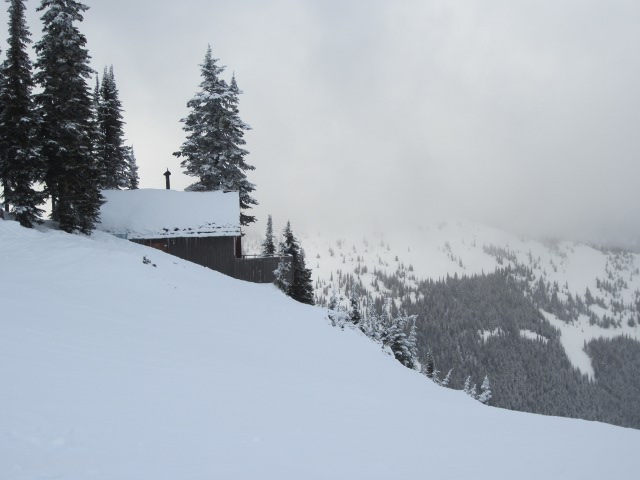 Even older than the lift above (I think) are the handful of cabins scattered around the ski area. All but one are grandfathered in and will ultimately disappear one day. 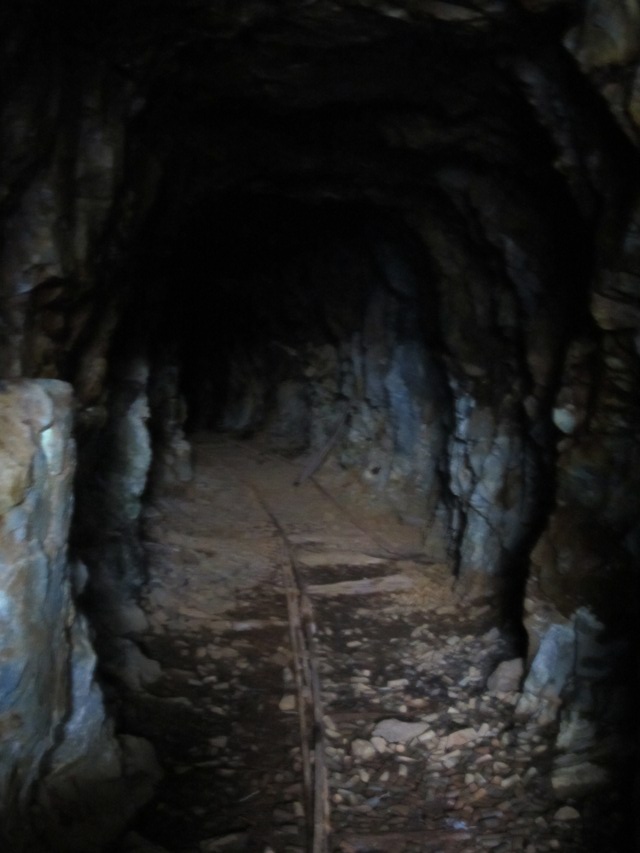 Older than even the ski area itself are the mine shafts that riddle Red Mountain. This one is fairly easy to get too, though the ice blocked entrance was tight. Thanks to D.L.'s Powder Tours, without whom I would never have found it, and that would be a shame as I absolutely love old mines.

Of course nothing is older than the mountains themselves. This is the view from the top of Red Mountain. Sadly the weather didn't give me a chance to get the more spectacular shot from the larger Granite Mountain. Click to view. 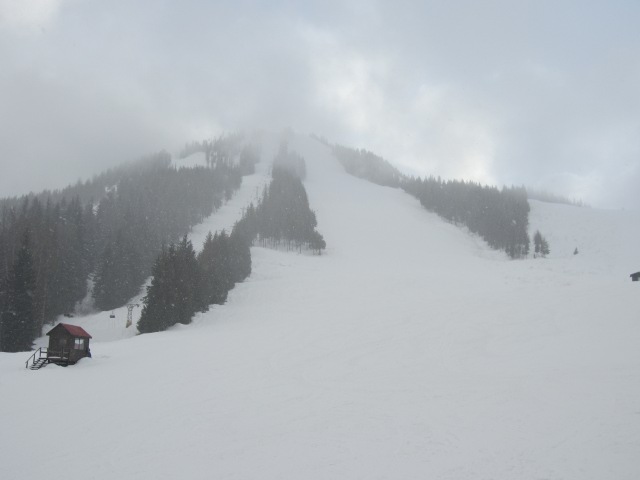 The historical photo tour concludes where the ancient terrain meets the ski area, with the course for Canada's first World Cup Downhill race in 1968, thanks to the demands of local superstar Nancy Greene. The course is a piece of cake compared to modern courses.