The drive to Whitewater was a long one, a bit over 300km from Fernie. I realized that I had been quite spoiled by how near many BC and Alberta resorts are to each other. Of course I couldn’t resist stopping in the Walmart on my way back through Cranbrook, once again going in for 2 things and coming out with 10. I was lucky that the weather held off as my route included a pretty big mountain pass that would have been dicey in anything more than a dusting of snow, especially given the frequent signs of large avalanches that clearly cross this highway. I couldn’t actually stop for the night in Whitewater, despite their allowance of overnight RV parking, as there is no cell service there… or indeed almost everywhere along the corridor south of the resort. I parked on the side of a quiet road in Salmo, the only point south that has cellular coverage, and quickly fell asleep.

I arrived in Whitewater the next morning to a fair amount of activity, this being a Saturday. Almost everyone here seems to be from Nelson, which is just 20km away. It is very much a local hill. Well, at least insofar as the minimal and less than fancy facilities (a single middle aged building housing all services), the 3 fixed grip chairs (2 of which are about the oldest things I have ever seen), and the crowd that comes here. But the terrain belies that local status. There isn’t a ton of it at almost 1200 acres, but they make very good use of that area, and the backcountry access is easy and plentyful.

However it isn’t a resort, so no mountain hosts to show me around. I can’t imagine there is much demand for such a service anyway. Everyone here is a local with a season pass, or a hard core ski bum who heard this is one of the places to be. As I did. Several times. In the last dozen stops I think I had no less than 4 people tell me I have to visit Whitewater. I hadn’t actually planned to include it initially as it did indeed sound like another little local hill. I’m glad people told me otherwise. I talked to a few people on the (slow) lift rides this day who were well aware of their mountain’s reputation. It has been written up in magazines a number of times, referred to as a hidden jewel for those seeking powder. The message seemed to have been heard as the average level of expertise here was very high, and almost everyone was rocking fat boards.

Ullr (the snow god) didn’t seem to be with me this day though. Despite the claimed 40ft annual snowfall (I’ve seen 45 feet mentioned a couple times too) it hadn’t snowed much for a week, and perhaps an inch overnight. And last time they did have a big dump it all turned rather hard. After a few nicely groomed runs on the two older faces of the ski area, I went over to the Glory Ridge area, just opened for last season and definitely part of the reason for the recent interest in Whitewater, and got a hot tip from the lifty there: try Backside Bowl. He was right. This north facing, heavily treed side of the mountain hadn’t fully hardened up. The snow was actually pretty decent. More to the point though: oh the trees! This place has fanTAStic tree skiing. I don’t think I have ever seen such consistently perfect tree spacing, and naturally so at that. I began to realize just why this place was getting race reviews. Trees are of course a great way of making a relatively small amount of terrain feel much bigger, because you can just keep making up new runs. Thanks to the amount of such perfect trees this place can boast, you end up feeling like you are at a much bigger resort.

Tree skiing isn’t limited to the Backside Bowl area though. There is great tree skiing all over this hill, some with alot more spacing, none that gets real tight. There is some open alpine-esque terrain too, in the form of Catch Basin, but it is quite limited. A bit of hiking will take care of that though, as the large bowl coming off Ymir peak (and right back into the base area) is an easy high off the top of Silver King chair. I can’t say I know what the avalanche control status of that area is though. For me, I could spend a few days playing happily in the trees here though, so I’m not about to complain about the lack of alpine.

As the day went on it dropped another inch of snow, but then got decidedly warm. For me, this worked out great, because more of the mountain was softening up nicely, and I got some good skiing in places other than Backside. I don’t think it will be very pleasant for anyone coming the next day though as it will have hardened up even more. Hopefully the snow keeps coming, as it is wont to do in Whitewater.

I suspect the place is dead on weekdays, but this weekend there were plenty of people there (even waited 3 minutes in line once), and the atmosphere was excellent. I generally don’t expect a particularly upbeat atmosphere at a local hill, but this place had it in spades. Friendly skiers, and some of the friendliest and cheeriest staff I’ve seen. All very low key and real though. There was no commercial feel to this place. That may change one day as they have big expansion plans and new owners who are said to be committed to funding them, but they claim to be aware of the value of the current atmosphere and will work to keep it.

The snow being as decent as it was in the afternoon (although by then a bit too heavy in the trees where it was deeper) I skied right through last chair. By then I felt thoroughly familiar with with hill, which is after all always my goal. Far from being bored though, I would have gladly spent another couple days finding new lines through the trees… well, with better snow conditions. Given the lack of cell service I had to say bye (I really hate wasting an opportunity for such a perfect place to park for the night) and made my way back south towards Salmo, and another less than spectacular spot off the side of a road in a quiet industrial area. Batteries were getting a bit low despite the warm temperatures (which mean my furnace fan has to work alot less) and I was down to 1/4 tank so no more generator usage tonight. Good thing I have another long drive coming up in a couple days to give the batteries a proper charge. 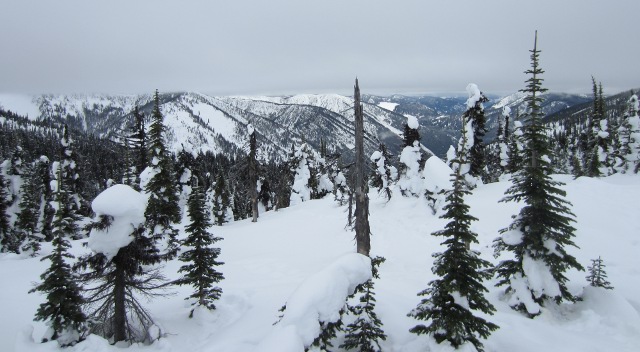 Looking into the backcountry from the top of Powder Keg bowl.

Near the top of Powder Keg Bowl again, looking towards the resort this time. Click to view. 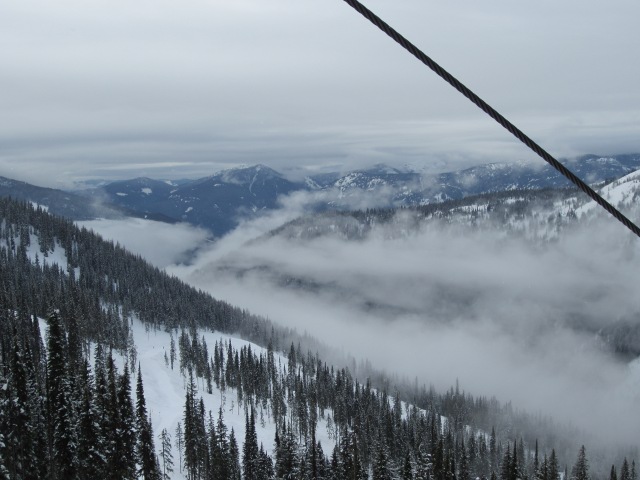 The view from the Glory Ridge side, with the access road running through the valley below.

Whitewater from the parking lot, showing how the resort wraps around the base. Click to view.