I had planned on hitting Baker on the 28th or 29th, following my last scheduled family stop  in Vancouver on the 27th, but sure enough RV preparation ate a couple days with gusto. I do find myself wishing I had bought, as I originally planned, an RV from someone who had done winter camping and sold it as a complete kit, including experienced advice. But no, I would be learning all the lessons the hard way. Certainly there was more than two days’ worth of things that needed to be done but it was time to get moving before complacency set in and I started rethinking everything.

So, on the 30th I finally crossed the border, spent an hour and a half sitting around (despite being on the Nexus program) while they looked my records over and took a quick tour of my living quarters, and got as far south as Bellingham where once again I spent a few hours shopping. Stores are quickly becoming a representative of civilization and normal life to me, which is not a good thing as time spent in stores always ends up with my credit card getting some exercise. As much as I wanted to find some nice spot off the highway to camp out, I ended up with my first Walmart parking lot night (Walmart allows overnight camping in their lots). There are a surprising number of RVers who take advantage of this, even (or perhaps especially?) in the winter.

The next morning found me doing yet more shopping, mainly trying to set up a US cell phone with a good data plan. Since I need to keep working full time as I travel (planned as 4 hours most days) a plan with plenty of data included and good coverage is critical. Unfortunately this also means expensive. While mobile phone service in the US can be incredibly cheap, if you want the full meal deal, not so much (compounded by my insistence to stay with a SIM card network rather than getting another phone). So now I give AT&T some $130 a month, but thankfully it looks to be a good choice, having good coverage and data speed at every stop thus far. More than I wanted to spend, but it felt very good to have that dealt with… and finally allow me to move on to my first new ski area.

Mid afternoon and I was finally on the highway heading east of town towards Baker. It didn’t take too long before I came across cars heading down from Baker. And more. And more… and even more. The road up to the ski area itself is decidedly tricky… a narrow two lane deal with snow banks crowding each side, VERY tight hairpins, and half the time a very long shear drop off to one side. Combine this with a nonstop snake of cars coming down, and a newbie RV driver in a 101″ + mirrors RV and you get one nerve wracking drive up the hill. Oh, and let’s not forget a first experience driving on snow covered roads without snow tires. Thankfully, other than one mirror being forcibly folded in on a snowbank, I got to the top unscathed and surprisingly without drama. Turns out, heavy trucks + snow = no snow tires needed. Good thing, as the alternative would have been another $1600 or so in tires that would have worn out by the end of this trip.

Another pleasant surprise awaited me at the top of the road: overnight parking at Baker is free and in a primo location to boot. A number of RVs lined one side of the upper lot already, complete with a beautiful view on three sides. They ranged from the small $500 beat up 80s class C to a very nice industry owned (Trew) class A with slideouts providing staff lots of room. I settled in, plugged the phone into the computer and enjoyed a nice strong data connection (thankfully ski resorts pretty much always have good cell coverage, even when they are deep in the middle of nowhere) and hit a backlogged email inbox for a few hours. As I did so, I could hear other RV dwellers having a good time, some younger ones with sleds on the snow banks on the far side of the lot, some older ones laughing over beers in their not very soundproof campers. Plus the snow began to come down harder and would continue most of the night.

Morning found be quite comfy on my warm memory foam topper and under my massive down blanket… but pulling off the blanket revealed a problem: it was -1C inside my RV. And this time it was not the result of me living a window open. My house batteries (the 2 that run the camper, separate from the one that starts the engine) had completely died overnight, and the propane fired furnace can’t work without any electricity to run the controls. I couldn’t start the generator without any hours batteries (bit of a catch 22) and wouldn’t anyway since it was still fairly early and I would wake anyone in neighbouring RVs, especially with the rather noisy unit I have. The truck engine it is then, which is surprisingly MUCH quieter despite being about 80 times as powerful as the generator. Once tolerably warm, it was time to put on the ski clothes, check the morning emails, boil myself some eggs for breakfast, and get outside to enjoy the real start to the whole point of the trip: discovering new ski terrain.

It was a fantastic start to the experience. The snow that had fallen overnight had pilled up pretty well… at least 10cm/4in on top of an already good soft base from the day before. And it was nice and light. The clouds stayed high so as not to interfere with visibility. I really couldn’t ask for much more.

Same goes for Baker itself. What a fabulous ski hill. I’ve heard Baker described as a typical regional ski hill. Not too big, old lifts, gets really busy on the weekends (and I was there on a Saturday in the midst of holiday season). I assumed the terrain would be mostly green and blue, the perception I’ve always had of most smaller ski areas. Oh boy was I wrong. Baker has some 8 chairs, mostly pretty quick triples, plenty of terrain, and I’d have to say that per acre, the vast majority of it is black and double black. A bit of alpine, lots of good trees, a number of tight couloirs… Baker has it all, and it came with a very nice coating of snow to boot. Not to mention spectacular views. I was one happy camper (literally as well as figuratively in this case). As to the place being busy, after talking to a few locals on the lifts it became apparent that their idea of really busy doesn’t match what we call a busy day at Whistler. I think I may have waited as long as one minute in line all day, despite several locals’ insistence that this was a pretty busy day. Although I suspect the day before may have been a different matter: turns out that huge snake of cars was the result of them breaking their one day attendance record. Wow, luck timing on my part, especially as I had tried so hard to get there a day earlier.

Staff were very laid back and friendly, as were all the people I met on the lifts. The level of skill was pretty impressive here too. Despite another stereotype I had about smaller hills, this place was not filled by people fumbling down blues, thinking they were great black level skiers. All the expert terrain here was being put to good use by alot of people. I wish I could have done a better job of joining their ranks, but my first-day legs were not going to allow any styling top-to-bottom runs. Frequent stops were definitely the order of the day. Ah the joy of being out of shape :\

Although I’m not really focused on facilities outside of the lifts and terrain, there were some nice lodges at Baker. The main lodge at their lower (and newer) parking lot was very nice looking, and they had a brand spanking new small log house lodge in the middle of the ski area. Very cute place for lunch or a coffee.

Oh, did I mention the Baker value? $52 including tax gives you access to all this.

Baker definitely turned out to be a nice surprise. Much more than I came expecting. Anyone from the Vancouver area should definitely make a day trip there one day (when the snow conditions are good). To the subheading of Confirming the Whistler Supremacy though, does Baker stack up? Yes and no. The hills are clearly different things. Baker doesn’t have any tourist village and minimal amenities, so it isn’t a destination resort. If it is your local hill, you will have a great time, but it is small enough that you could get a little bored over the course of a season. But for an occasional visit, and certainly as a day trip a couple times a season at least, it is fantastic, particularly for strong skiers and boarders.

What a start to the adventure. As it would turn out, it would be a while before I could repeat such a fabulous ski day as Mother Nature would not cooperate fully. But hey, anyone who is familiar with snow sports knows that is just the way it is. Be happy when you are given a great day, be satisfied when you are not. Today was firmly one of the former. The cold morning proved I had RV issues to sort out still, but I was pretty sure I was going to enjoy this trip. 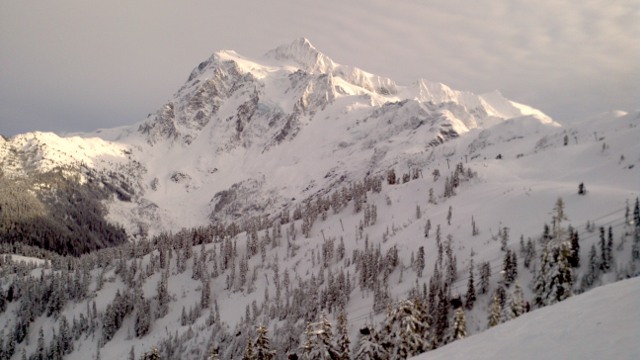 Not Mount Baker, but an impressively rugged peak on the other side of the ski area. 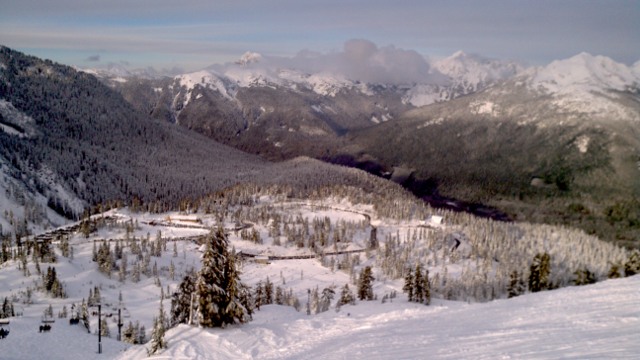 The older upper base, with my home for the night among the cars seen on the left edge. 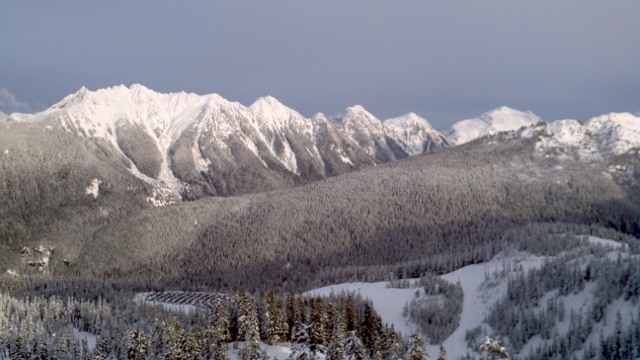 More fabulous views, this to the left of the peak pictured two above.

All inbounds terrain, although it requires a touch of hiking, still fairly fresh at the end of the day thanks to a good skiier per acre ratio. 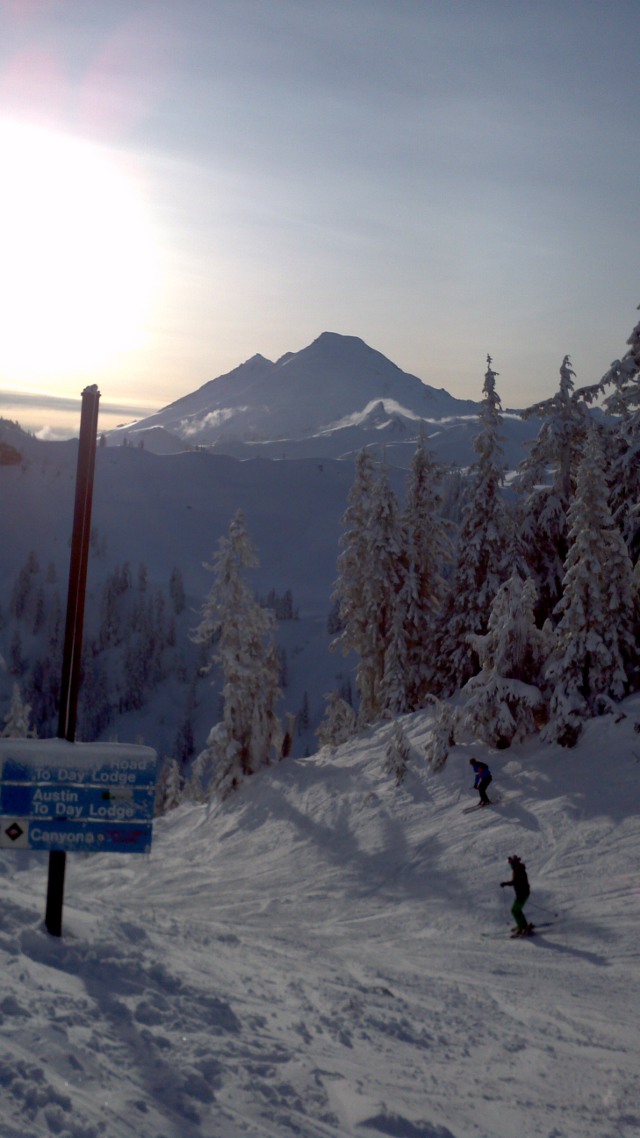