So there I was, parked on the side of the road in Enumclaw (the nearest proper town to Crystal) trying to make a rather difficult decision. It started off as deciding which of the three ski areas at Mt Hood to visit, since visiting all three didn’t really make sense. Feedback from the online skiing community at Teton Gravity made it pretty clear that none of the three were in good shape. In fact, none of anyone south of where I was was having a good year. Make that, everyone was having a disastrous year. South of Oregon, Mammoth and Tahoe had effectively no snow. Some man made and a little leftover form snow in November. Worse yet, turned out Utah and Colorado didn’t even had passable snow. The obvious option was to head back north and hit BC and Alberta first, effectively reversing the loop I had planned. I REALLY didn’t want to do this though. It would cost time and gas to backtrack, I would have to deal with switching cell phone providers again, my health insurance would have to be adjusted. But most of all, I was looking forward to visiting my friend Dean in two days. I tried to convince myself I could stop and visit for a week, where I would have time to catch up on work and do all the work the RV needed (like fitting the added insulation correctly, wiring in an inverter, trying to quiet down the generator), but in the end I had to face that this trip was about skiing, and what is the point of visiting resorts that had nothing but a strip of man made snow?

The decision made, I started driving north, ending up stopping fairly late in a semi abandoned development more accurately, it was a very new, massively aggressive development that had roads put in and then clearly had a hard time building and selling on that land). It always strikes me as odd seeing this kind of large scale land development. I can’t put my finger on why, but it just seems… unnatural.

The next morning I found a battery shop and had a rep look at my questionable original battery. Thankfully, this lady had some clue as to what she was doing with her fancy battery diagnostic tool (unlike the first shop) and confirmed the capacity was down to 1/3 of what it should be. Two new batteries it is then. Unfortunately I would not be getting them here as the options they had were decidedly more expensive than the equally speced Costco golf cart batteries. I picked up a small inverter to give myself the option of charging the boot heater batteries and other AC only gadgets without being plugged in or running the generator, and moved on to Costco, where I treated myself to a pair of new batteries, which by all accounts should do considerably better than the 12 volt RV/marine batteries I had, even when new.

The last shopping done, I made the run for the border and my next stop: Manning Park. I really wasn’t sure what to expect of this ski area, as I’ve heard it mentioned many times but never really heard any descriptions of it. But it is a place I have always wanted to visit, and at least I knew it had some snow. I got across the border fine, and prayed for good traffic so I would make it to Richmond in time to pick up a new battery for the laptop.  20 minutes on a charge wasn’t working for me, and I was hoping that offloading some of my power needs to the laptop battery (which could charge while I drove and hopefully see me thru an evening of work) would help with my house battery capacity. I did, as I so often do, miraculously make it with 5 minutes to spare. Now I had to deal with getting my phone switched over to Telus so I could keep working while in Canada (roaming on my AT&T account certainly was not an option). It took a while but I got it done without too much pain, and ended up being significantly cheaper than the US plan, much to my surprise. By now I was tired of shopping (both that day and in general on this trip) and it was getting late, so it was time to head towards Manning, close enough to make the run into the ski area in the morning anyway, and find a spot to park. That spot ended up being a gravel clearing across from a nice highway rest area just before Hope , with a fellow vehicular sleeper next door doing his best to block any light out with sheets covering the windows. With good roads the drive to Manning in the morning should only take about an hour.

In the morning my neighbour was gone, but another one had appeared. I don’t envy someone who has to sleep in a car seat. Not something I’ve ever been able to do. Thankfully I was well rested so I hit the road to push through to Manning by the time it opened. Before long the scenery began to turn wintery, and the road picked up a layer of snow, which got progressively worse. By the time I reached the turn off to the ski area, I was thoroughly pissed at the road crew for doing such a lousy job of plowing. The rough road necessitated a rather slow pace, which now meant I was already a half hour past opening time. But it was about to get MUCH worse. The Manning ski area is some 10km south of the main highway, and not surprisingly it isn’t exactly perfectly plowed. In fact, it was the worst road condition I have seen. Not that it wasn’t nice and compact. The problem was it was solid washboard, which is annoying at the best of times, but in an RV it is murder. I had to spend most of the drive at about 30km/h lest everything fell out  of my cupboards.

I did, eventually, make it, and pulled into a relative small parking area next to a rather basic set of base area facilities. This ain’t no big resort, and this is reflected in the reasonable ticket price, although it is still a ways from the value that Baker provided. The closest place to stay is at the lodge by the highway. Although you can stay in your RV right at the best of the hill, with a decent view even. I would be tempted to spend the night here, except there is no cell service throughout Manning Park.

Manning Park’s on-hill facilities match the minimal base area: two old double chairlifts and a couple surface lifts. Only the two chairs were open this day, despite it being a weekend (only one of the chairs is open midweek). Thankfully the reason for this was all the fresh snow making it hard to get the beginner’s T-bar area open. Skiable acres is listed at 140, even smaller than Seymour, but Manning does very well for such a small area, partly due to the respectable 1400ft of vertical. Now granted the new snow and low skier numbers is likely colouring my opinion here a bit, but I had a thoroughly good time at Manning. The snow was definitely on the heavy side, but tolerably so. Nothing like Stevens or even Crystal had been. And there is plenty of decent advanced terrain, much of it through well spaced trees, but also some small bowls.

I wouldn’t want to live in Manning (not that you can unless you work at the lodge anyway) because I would be bored pretty soon, but for the odd day out skiing if you live in the Fraser Valley, or even for a weekend once a year from farther reaches, Manning is, surprisingly, worth the visit. At least if the snow conditions are good. The lodge by the highway is a pretty nice looking place to stay too, with similarly reasonable pricing.

I closed out the day feeling I had sufficiently explored the little resort, and happy to have a good idea of what Manning really is. I was never sure if it was a small local hill (as it is) or a substantial resort. In any case, I was glad I had stopped here and not at Hemlock, the other option I was considering. Right now though, my only option was to get out of Manning to where I could get cell reception to get some work done. Penticton it is then.

Looking at the top of Orange Chair (which goes up the big clearing in the middle) from Blue Chair. All the interesting terrain is off the right and left of Orange Chair. 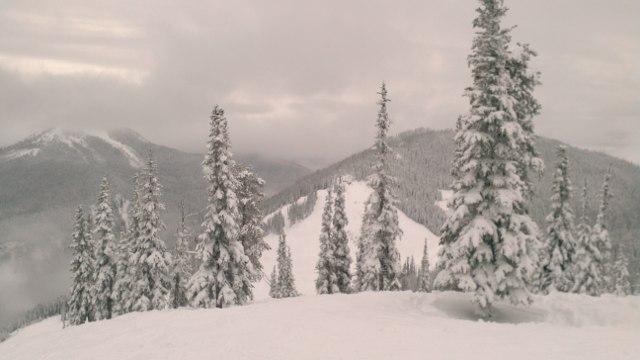 And looking back at Blue from near the top of Orange Chair. You'll have to excuse the lousy cell phone photos. 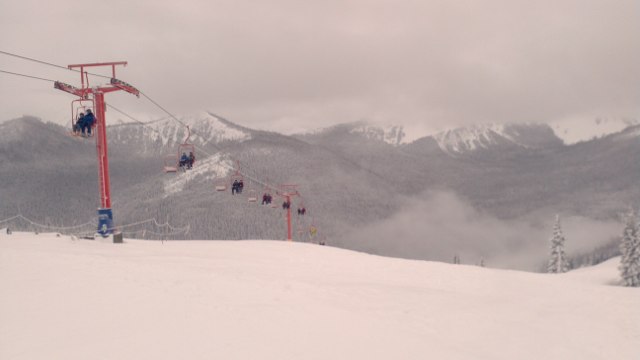 The equipment at Manning does the job, but is definitely old and basic. 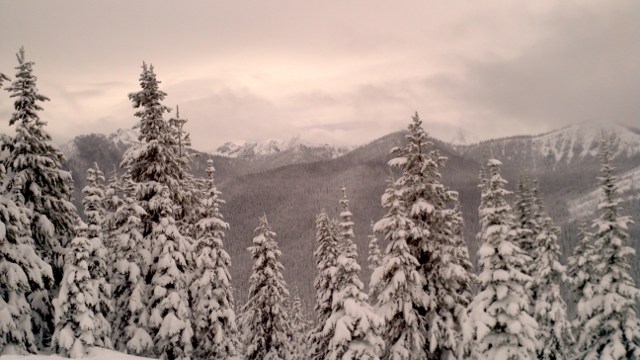 The views on the other hand are ageless, and quite satisfying.