Back through greater Seattle I go, but in this case I didn’t mind too much since it meant an opportunity to grab a new battery. Decided not to hook it up just yet though, pending a more convincing diagnosis on the remaining battery. If the second one was also dying, I would rather switch to a pair of golf cart batteries, as there seems to be unanimous agreement that this works considerably better than a pair of standard Marine/RV “Deep Cycle” batteries. I had to admit, at this point the power/battery saga was grinding on me pretty hard. I had expected, based on what I read, that I really wouldn’t have to worry about keeping the batteries charged, that they lasted several days typically. But in fairness, I’m probably not applying a typical load what with the extra stress caused by running the furnace so often.

My next chance to test the batteries overnight would come that night. By the time I got south of the Seattle area, it was quite dark already and I knew pushing through to the ski hill would be a waste of a potentially beautiful drive. I spent quite some time in the town of Enumclaw trying to find what looked like a good place to park for the night. The satellite photos on Google Maps are a fantastic tool for this, but unfortunately they often don’t tell the story of a gate blocking what looks like a perfect road. I ran into this three times this evening, before finally finding a large, empty horse trailer parking lot off the suspiciously quiet (today at least) highway to Crystal, right across the street from a large forestry facility. I wasn’t worried about the potential noise from the yard as I picked up a whole box of kick ass ear plugs. Only earplugs I’ve ever had that I can wear every day without my ears bleeding.

The next morning my battery was all but dead, so I took advantage of the remote location to run the generator for a while to top it up, and since the generator was running anyway I decided it was time to pull out the hair dryer (which of course requires AC power) and spend some time peeling the stickers off the RV (don’t see why I should be a traveling advertisement for the rental company I bought the unit from). They came off fairly well, but it was still a slow process… and only about 1/3 done after over an hour of work.

After a few more hours spent getting some work done, the daylight was getting short so I started the push to the ski hill. The highway remained extremely quiet, and also extremely pretty. Much of it runs through country clearly populated the the timber company as the logging was all but nonstop, until I hit the Rainier park boundary. Once in the park the drive became a narrow run through fairly think forests, and the occasional tiny sign of settlement. Again, very picturesque. After a last batch of rather rustic looking cabins spread throughout the trees, the highway ended (the pass is closed in the winter) and the turnoff to the ski area began. The road up to crystal is fairly tame, and STILL all but empty despite me driving u pas most people should be driving down. I was starting to understand why that may be though, as the weather was not nice at all. It was a mix of heavy snow and rain, and some pretty strong winds. Once I got to the top, the parking lot was judt plain empty. Clearly no-one had bothered to come up today.

No-one except what few people may be staying at the limited accommodations up here and the handful of RVers parked in the large sheet of ice that passed for a parking lot. There were quite a few spots here, over 100, with perhaps have having power. Interestingly RV parking here was managed by the US Forestry Service, not by the ski resort. I chose to give the USFS the extra $10 and go for the $30 with power option. Kind of pricey given how little you get for that money (no facilities at all that I was aware of). I dropped my registration in the collection box and settled in while the wind tried to tip over my RV repeatedly.

The next morning bore the fruit of all that wind. The weather had changed and there were even some breaks of blue in the high clouds. If that storm had also brought a good dump of snow this could be a very good day. Unfortunately, it didn’t. It had clearly rained almost all the way up the mountain, and then semi-frozen into a rather hard layer. Everything I hit was very heavy, and frequently rather crusty. Not the greatest conditions, except for one small patch coming off one of the peaks, accessible only by a rather old 2 person chair.

But Crystal wasn’t just ancient chairs. Oh no, this place was pretty fancy. Two 6 pack  high speed chairs, one high speed quad, and a gondola going top to bottom in one fell swoop, ending up at a stunning view point (clearly designed with sightseers in mind). The base area, though minimal, was quite nice too, as was some of the on-hill dining options. The fancy continued with a small but fabulous example of top notch guest service. Getting on a chair I somehow indicated I didn’t know where I was, and the liftie asked if I had a map. When I arrived at the top station, the liftie there was standing there, map in hand, to pass to me as I got off the chair. Impressive.

This was no small local hill by the way. 2600 acres are on tap, though admittedly some of it is not very usable due to an unreasonably long cycle, and one of the bowls does take some hiking. But even sticking with the more convenient lift serviced routes, there was a very nice selection of excellent terrain. including several bowls and a good selection of nicely spaced tree skiing on the north side. I found myself thinking this place deserved a second day to explore… or at least it would have had the snow been better. I also found myself wondering why I had never heard of this place before? Why so many people from Stevens and no-one from this fantastic place? It doesn’t seem any farther.

I gate it right up to last chair but still came away feeling I had not sufficiently experienced this hill. I start to wonder whether this whole idea of 1 day per resort (with a few exceptions for the biggest names) was realistic. This place was under 3000 acres and still had much more than a day’s worth of exploration to serve up. But I had to move on to Mt Hood, so I headed back to the homestead and got myself ready to move. Before I pulled away though, the camp host came by to chat, and I found out that the whole RVing at Crystal program was on probation. Seems past years have seen a few too many party bus type campers, and the USFS just isn’t willing to deal with that. Hence the position of a Host to keep people in line. I hope they keep the program going, and it would seem dumb not too given there were several RVs there even on such a dead day, and I was told they fill right up on good weekends.

It was already getting dark, so time for me to mossy on,  and put my mind back on the task of which of the three ski hills at My Hood to visit two days later.

The Crystal base area. Compact but nicely done and well maintained. 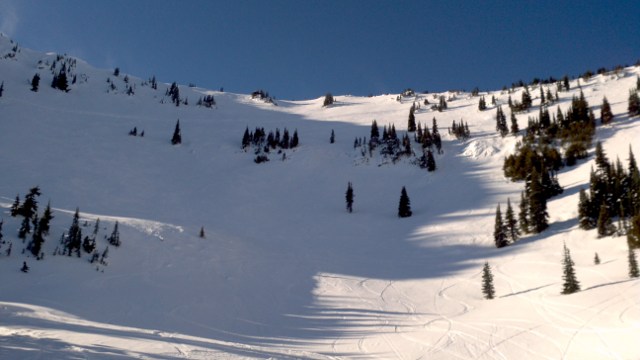 Looks like heaven, but this day it was super heavy and very crusty.

Looking south from the top of the gondola to the Silver Queen peak, only 10' shorter than the Silver King, but the latter requires hiking. 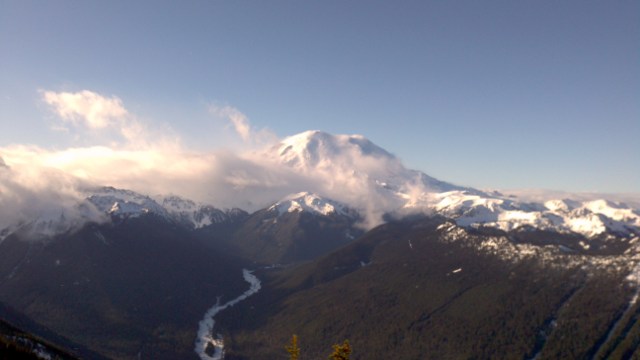 Mount Rainier trying to stay hidden. But that's hard to do when you are the biggest thing around and the namesake of the rather large park you are standing in. 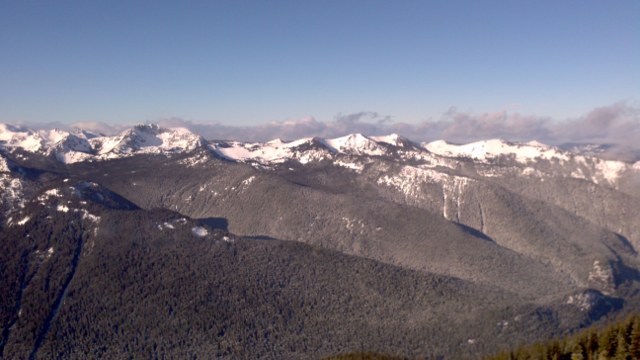 More of the view off the backside of the hill. The blue skies wouldn't be there all day, but while they were the views were fantastic.