After a few hours of work in the morning, as usual, I began episode 2 of the spectacular Icefields Parkway Scenery movie (pictured in . I just can’t get bored of the show. It wasn’t the sunny weather I had been expecting, but the clouds were high above the peaks, so I was a happy practicer of vision. I was struck by the realization that despite having driven through here twice now, and each trip being so memorable, the place is so huge that there are many sections I had forgot. As I wrote before, everyone needs to drive this road at least once. I was also amused that driving a 6 ton RV without snow tires on a sheer ice covered road at 80+ km/h was now normal to me. Never thought I’d see that day. Despite the speed and leaving what I thought was reasonably early, the trip took a while and I arrived back at Louise as it was getting dark. Not wanting to stay in the same place as last time, I went down the little traveled Bow Valley Parkway until I found a small plowed lot and called it a night.

I woke up to a rather spectacular view with Castle Mountain looming above me, a clear sky, and -10 on the outside thermometer. A short drive took me to the base of Sunshine Village, buried deep in a narrow valley, The iconic Sunshine Village gondola takes you on a rather long ride up to the core of the ski hill and the actual village, going through 2 stations to get there (one providing an unusual hard change in direction). Stepping out at the top revealed a sight I had not seen in a while: the sun. This place was living up to its name this day. The sun was out in force and all the bundling up I had done that morning expecting -15 or colder up top was quickly proving to be the wrong decision, as it was warming up quickly.

Another thing I hadn’t seen, ever, was an actual village this high on a hill. A number of hills have a village right at the base, some have one part way up (specifically Big White) but this place, with its small assortment of lodges on top of the handful of restaurants and shops, was way up there. Mind you, in the days before the gondola, when a bus took you up instead, it wouldn’t have been especially unique, but the experience of taking a long gondola up to a village lying just short of the alpine is pretty neat. This is certainly taking the ski-through village to another level.

What really struck me though was not the village, but the space. The village sits at the bottom of a wide open, mostly alpine valley, and provides a massive feeling of space. The main peak one one side, and two small peaks (if you can call them that) on the other are one big open area, with fairly flat open areas on two sides increasing the sense of space. It is a quite spectacular view, and one that makes the place feel bigger than the (rather substantial at 3358) acreage suggests. That’s not all there is to Sunshine either. On the backside of the main peak is the decidedly double black Delirium Dive ridge, accessible only if you have a buddy, shovel, and avalanche transceiver, and across from that ridge is Goat’s Eye mountain, a more traditional feeling expansion to the ski area but one that also offers some nice bowls leading to the foot  of Delirium. Off the far side of Goat’s eye is another section featuring identical access restrictions. However this area was not open as there was not nearly enough snow.

For that matter, Sunshine was hurting for snow almost everywhere. Enough so that they owe me a new pair of skis after all the rocks I hit that day, especially on the advanced trails. This wasn’t so much due to a lack of snow I was informed, but because they’ve had so much wind this season that it all gets blown away as soon as it falls. There were snow fences set up everywhere combating this, and creating ribbons of snow through otherwise mostly bare rocks. Some of the terrain probably shouldn’t have been open at all, as it was all but impossible to avoid the rocks at times.

Between the village and Goat’s Eye, was a small assortment of additional trails and a couple small lifts and it was this area in particular that left Sunshine feeling disjointed, unplanned. Sort of like suburban sprawl, it seemed like Sunshine started from a small area that hadn’t been set up with expansion in mind, and then grew outwards however it could. It added some confusion to navigating the place, which was otherwise very easy to get acquainted with thanks to it being so open. A couple of the main chairs seem like they weren’t planned very well either, with the Strawberry chair not having any discernible value for example, though perhaps its raison d’etre would become clear if I was working in operations there.

One thing that was definitely unplanned, or just badly planned, was the horrible lift line system. Everywhere I have gone to uses the same system maze system (which isn’t really well named). You start with either 2 or 4 (or sometimes even 8) lanes and just merge pairs down till you have the neck heading for the chair itself. Sunshine mostly has that, except they seem to have forgotten the merging part. They will take four lanes plus one singles lane and a ski school lane, and just dump em all together right in front of the tightest and longest pre-load lanes I have ever seen, which make it very hard to pole your way forward and very easy to hook a ski around a post. And it wasn’t just me thinking a different system is lousy. I saw it causing problems all day. The lift line confusion was constant.

Thankfully it wasn’t exactly weekend crowds, although for a midweek day it was surprisingly busy, something that a couple regulars confirmed for me. The consensus seemed to be that the beautiful weather was drawing some of the Calgary crowd (only 1.5 or so hours away) in for a ski. And it was beautiful, but quickly became obvious that it was a bit _too_ sunny. Liftees (who were generally in pretty good spirits, often moving to the dance music that was played at most lifts) were nearly down to t-shirts, I was sweating even after losing a layer and the mitts at lunch, and the snow was decidedly springy by the end of the day. I don’t know that I would have wanted to ski a day later as everything was probably going to be pretty solid.

On the plus side, it isn’t hard to get out of the busy terrain into some mild backcountry. With the place being as open as it was, and the peaks that surrounded the main skiing area, it was very easy to access some backcountry runs with a mild hike. Gates were even set up to clearly show you where to access the outlying areas. And generally they came right back into the ski area so getting lost is not much of a danger.

By the time the lifts closed I felt I had got a solid feel for the mountain, surprising considering its size, but clearly thanks to the openness that leaves little terrain to hide from view. Since there is no parking in the Sunshine lots, I made my way back out to the highway and backtracked towards Castle Junction, where I would turn off to head to my next destination.  Here I found perhaps the best overnighting spot so far, a quiet little lot at the foot of another national park trailhead well away from even the quiet Bow Valley road, and offering a spectacular view to boot. Looking at the map at the trailhead showed a lovely network of trails and had me thinking I really need to do some hiking in the summer. You could easily spend years exploring the trails in Jasper park alone, nevermind this Banff park and Kootenay park which I would be traveling through tomorrow on the way to Panorama back in BC. I would wax on about how this is the most incredible part of the world, but I know from my limited travels that almost everywhere you go has beautiful sights to offer. Still, this has got to be one of the most spectacular places your eyes can fall upon. 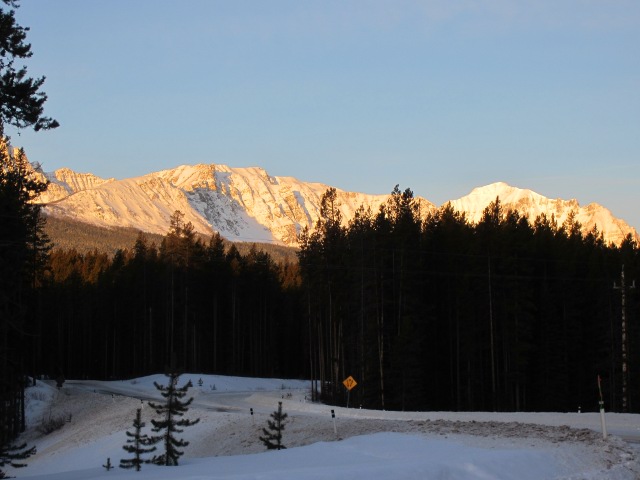 Traveling east on the Bow Valley Parkway, looking for a place to stop for the night 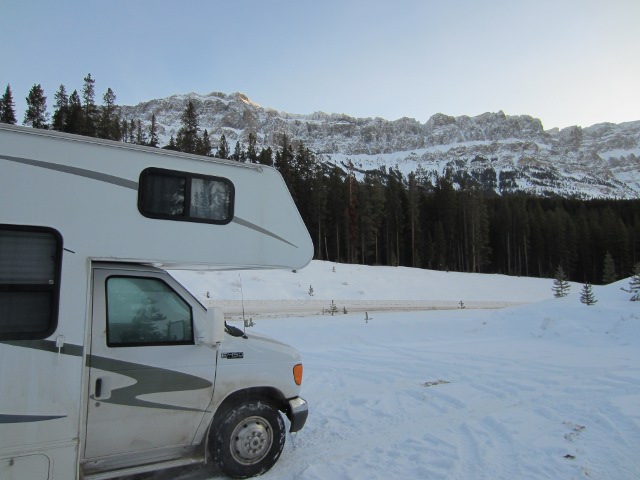 And I sure found a good one. Nicely plowed spot aside the all but deserted road, with Castle Mountain looming, and a partial view of the valley on the other side. 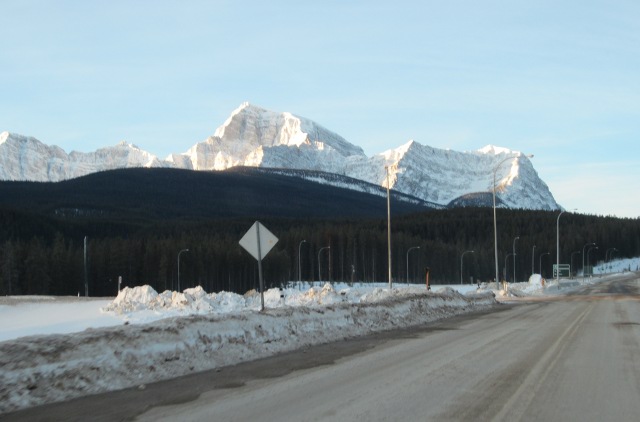 The amazing views don't end with the Icefields Parkway 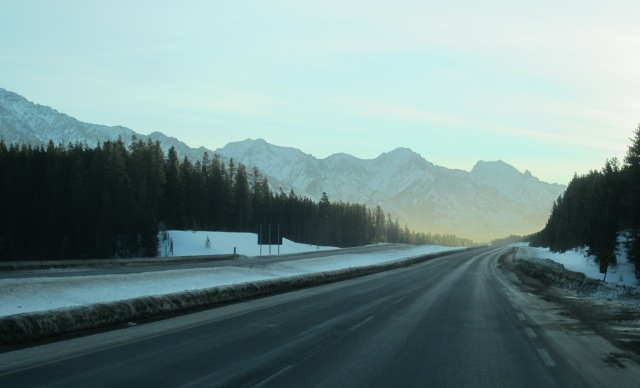 A bit of morning mist making things look a touch ethereal, as I'm getting close to the turnoff to Sunshine

The village in "Sunshine Village", at the top of the gondola. This is the only real alpine village I have seen, as there is no road to get here whatsoever. 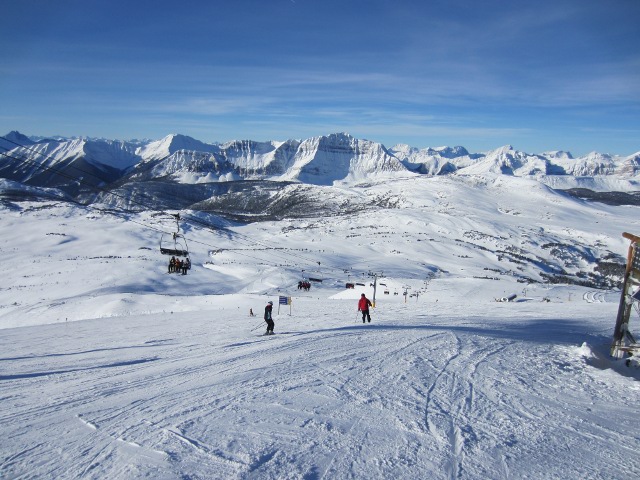 Looking south from Lookout Mountain, The photo only hints at the feeling of space you get here. It is like a large valley except it's well above the surrounding valleys.

From the peak of Lookout Mountain, with the controlled access area Delirium Dive dropping off in grand fashion. The view seen in the photo above is behind the people seen hiking up. 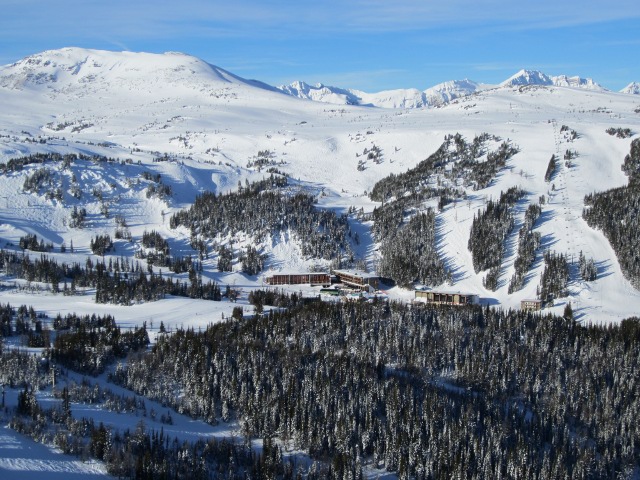 The Village viewed from the west shoulder of Lookout

Looking south from Goat's Eye Mountain, with Delirium Dive in full view. I really wished I had avalanche gear to take a run. 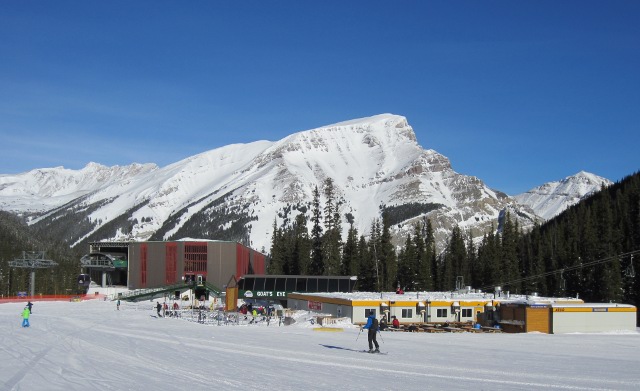 The base of the Goat's Eye area. Decidedly more utilitarian than the village.

At the top of the Wawa chair, looking into the inviting but flat backcountry.

On the backside of the peak (and we're stretching the term "peak" here) of Mt Standish.

On the south edge of the Standish area, with Lookout and Goat's Eye to the left of center. Most of the open field to the right of center is out of bounds. Seems like a natural spot for a cross country loop.