Staying down in the Valley in Vernon didn’t help with the cold much… over the next couple days it got to -20C at night. With those temperatures my batteries wouldn’t last a day, so I booked into an RV park, a clearly budget affair with alot of home-made amenities, but perfectly serviceable, pretty cute with a creek running through it (ducks included, despite the cold), and $20 a night. It was supposed to be $40 I believe, but the proprietor was a happy drunk, and decided I needed a discount. I wasn’t about to argue. He was drunk on day two when I went to renew, expecting full pop. Granted, at this point I was feeling decidedly under the weather so I would have paid whatever it took to not worry about power.

On my last day in Vernon, starting to feel a bit less sick, I found a local house inspector with a thermal imaging camera and had a few shots taken to determine where the cold was leaking out. The shots were extremely informative, but unfortunately the only apparent smoking gun was a badly insulated floor. No particularly easy way to fix that myself. That, and the structural beams, but there was definitely nothing to be done there short of buying a different RV.

The weather warmed up quite a bit and I got to feeling like I could ski, so I pulled up my roots and headed for Sun Peaks, the second resort I had been to before. Mind you, that was in fall and I didn’t ski and never even made it to the village so it was all still new to me. Now I can’t tell what had been done since I was last there but the place definitely looks like alot of work went into it. It has a rather Old European feeling ski-through village, albeit fancy euro. I was quite impressed by the display, even if such amenities don’t actually matter to me since I never eat out or go for a beer in the evening. I was surprised by the number of people here. Despite the so-so conditions and it being a weekend, the village was lively with skiers. Perhaps Sun Peaks has done a good job of marketing themselves into a proper tourist destination,

I joined a group of people and a couple particularly fun hosts for a quick tour of Sun Peak’s rather impressive 3700 acres of terrain. Now unfortunately we wouldn’t be touring the top of the hill as thick clouds were claiming the peak, and all the near-alpine terrain for itself. In fact I wouldn’t get to the top of the hill all day. I tried a single run down through an upper bowl and pretty nice fresh snow but just found myself picking away at the slope, not being about to make anything out past my ski tip. Rather a shame as most of the good terrain looked to be up top. As intermediate terrain goes, there are plenty of options here, with nice long runs cycling right back to the chair. Cycling from the original ski area to the recent expansion on the far side  of the valley isn’t so easy, as it takes a rather long traverse to get around (and crossing the street on the swing back). Those individuals with less fear of injury than I may be looking for terrain parks: they’re in good hands here. There are no shortage of park features here.

A cute little tradition I’ve seen at every resort so far is a live Christmas tree, which is to say a tree out on the slopes alongside a lift line with a few Christmas balls hung. Sun Peaks, or perhaps its visitors, have decided to take it a step further here by making it a Christmas Tree Alley. There must have been at least half a dozen trees of varying sizes lining the lift all decorated up for the season.

The clouds lifted a bit in the afternoon, allowing me some quite pleasant runs through the trees and a decent amount of fresh snow. It was a near ideal winter scene with the trees laden with snow. However while the middle mountain became reasonably clear, the top continued to elude me. Quite a shame, but since Sun Peaks isn’t all that far from me, I can always come back and finish the job next year over a couple days.

Sun Peaks would seem poised to eat some of Whistler’s visitors. It isn’t hard to get to, the village is similarly tourist oriented, they have almost half the terrain of WhistlerBlackcomb, and clearly they have done a decent job of making themselves into a tourism destination with the volume of people that were hear, midweek and all. But while Sun Peaks does many things right, they ARE harder to get to than Whistler (long drive or a connecting flight), it didn’t feel like 3700 acres even with the parts I didn’t get to considered (though that could change upon a clearer visit), and they get alot less snow. Good for those that prefer sunny skies over powder I suppose, but not my thing.

The mountain closed, and while Sun Peaks has a nice lot where you can stay the night, I moseyed on back to Kamloops to their big fancy aquatic center for a hot tub and a shower. A few laps in the pool reminded me that even if I think I’m in decent shape from all that skiing, swimming makes skiing look like a sport for geriatrics. Another stop at Costco for some supplies and for their parking lot for the night. The next day I would begin a long drive back towards Vernon and past it for a ways to my next stop, one I was pretty excited about given how much I’ve heard about it: Revelstoke. 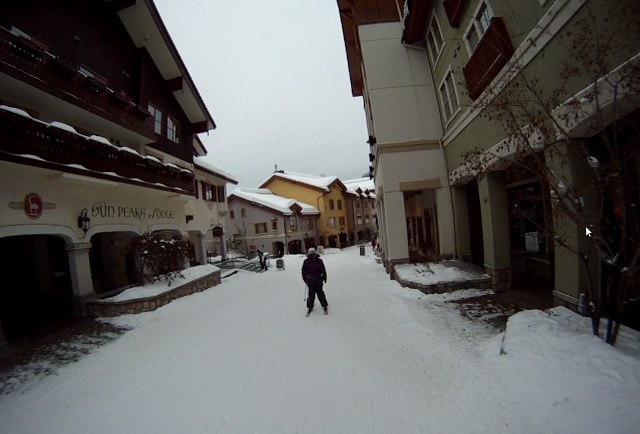 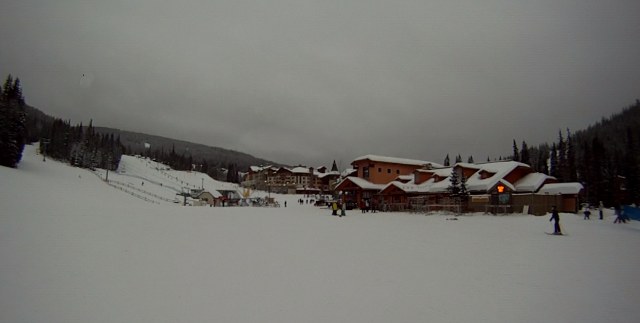 The village seen from the other side, from the main ski area base. 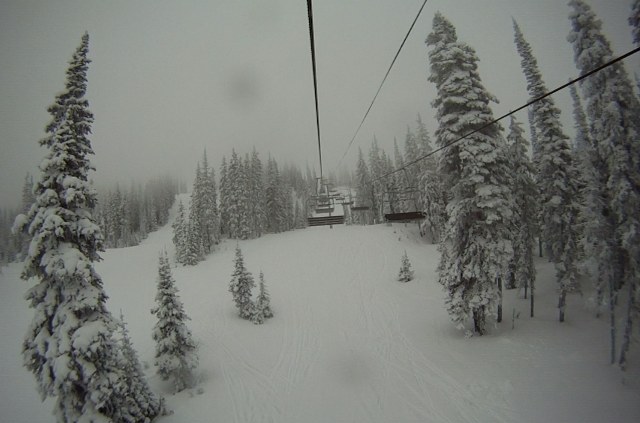 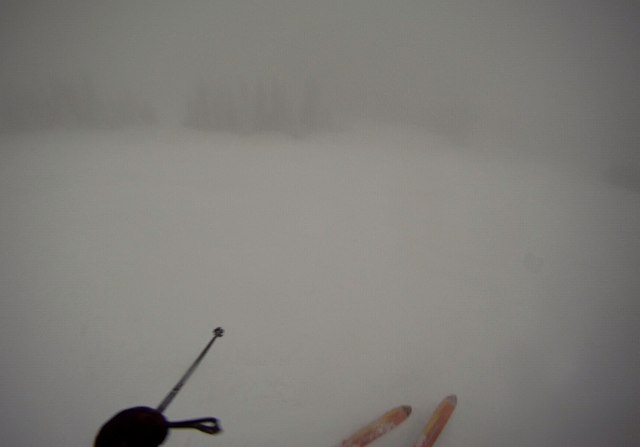 The visibility has improved slightly here. At least I can see my ski tips and a hint of the tree line. This isn't actually representative of Sun Peaks however, as the stats show (surprise surprise) alot of sun is the norm.