As I drove east towards Stevens Pass, there were alot of cars coming the other way. The proprietor at Doug’s RV where I had my battery mystery solved mentioned that it had been that way for hours. Given that this was the last day of holidays (an observed Monday, as the day before was New Year’s Day), this was not unreasonable. That and when I ask guests I am showing around Blackcomb where they usually ski, Stevens is the most common answer I hear. Clearly the popular choice of the Seattle crowd.

As I got past the populated areas and into parkland, it began to snow. Pretty heavily. Now I had an intro to driving the RV in the snow with Baker, but that was nicely plowed, sanded, and heavily traveled crawling. I was feeling a bit anxious about a quiet mountain pass on fresh snow at highway speeds. Well, highway speeds in this case meaning 50 to 60km/h. Thankfully, there was hardly anyone traveling in my direction so I wasn’t holding traffic up. Some 20kms or so from the ski area, I came across a message in big lights above the highway: “heavy snow ahead. oversized vehicles prohibited” Uh oh, does that mean me? I started trying to find out. The web (thankfully there was a good mobile signal) didn’t have my answer, and the couple numbers I called went to closed offices. As I was trying the local highway patrol number again, a bit of luck as a cop pulled up behind me and came knocking on my window (perhaps the first time I’ve ever been happy for that to happen). No, it does not mean me, and the officer assured me that it didn’t get much worse ahead.

A little while later I arrive at the base area, brightly lit up amidst the foggy darkness and heavy snowfall. A rather eery sight actually. But one I was happy to see. Stevens has a great area for RV parking. Some 70 spots, many (perhaps all) with power, and right at the base of the hill… in fact it is better parking than the main day visitor lots. $30 isn’t the deal of the century, but given what you are getting, pretty reasonable. And as it turned out I was happy to have the power as my battery was on its way out after just a couple hours.

I was up fairly late that night, trying my best to make straight cuts in my boards of insulation and making a tight fit to where the pieces needed to go, all the while trying to design pieces that would be convenient to take in and out as needed, and minimize waste. Oddly similar to programming a website. About midnight I popped my head outside to move the last full piece, and discovered a solid 10cm since I had arrived… but also a suspiciously warm ambient temperature.

The next morning bore out the curse of that warmth: all that fresh snow was heavy… I’m talking the heaviest “powder” I have experienced in my life. At least it was served up with broken sun that morning, but still quite a disappointment after what the previous evening has promised. Combine such heavy snow with my tuckered out, early season legs and it quickly became apparent that this would be a mostly piste day. Which, surprisingly, was not all that well served. The groomed parts of Stevens feel almost smaller than Steven’s 1100 acres, which the off-piste and black terrain actually felt pretty generous. Once again, not the terrain type distribution I had expected from a regional ski hill. I found myself cursing my weak legs and the heavy snow as this place could have served up a rip snorting good day otherwise. But as things were, my exploration of the more interesting terain had to remain limited.

Other than the selection of advanced terrain and how far the hill was from the city, I would have to say Stevens was more or less what I expected. Generous daylodge buildings, but clearly nothing targeted to a destination skier, a mix of lifts including a couple high speed quads (and an up and over lift, which I have never seen or heard of before), and a mix of skiing abilities represented (mind you, this isn’t the weekend, so probably not truly representative of Stevens’ usual clientele). The views perhaps were better than I expected though. Being this far out along a mountain pass, Stevens afforded some very nice views, especially over the backside.

A very cool feature I saw for the first time here: RFID tickets. Rather than having your ticket scanned by a person every time you boarded a base area left, you simply went through a gate that read your ticket in your pocket and opened the gate to let you through. Very efficient. Definitely something more ski areas should use I think. I’m sure it takes a bit of capital to start, but given the reduction in labour I would think it would pay off fairly quickly. More importantly, it is just plain convenient for the skier. Another cool techie thing I didn’t realize at the time, is Stevens claims to be supplied by 100% wind power. Call me an eco-geek but I like that.

Does Whistler’s superiority remain intact? It does. But if I lived in Seattle I don’t think I would be making the trek up north more than a couple times a year. Stevens is pretty decent for a weekend ski, especially if you don’t go every weekend. Wish better snow it would have been a very good day of skiing. Although I think if I lived in Seattle I would be seeing more of Baker or Crystal (coming up next).

Since my cheap ass didn’t want to pay for another night here, and the road was looking pretty clear, I took my leave of Stevens, backtracking towards Seattle. Certainly not much of a snake of cars leaving today. Stopped at Doug’s RV on the way to find out that my battery was manufactured in ’08 and no warranty remained. Oh well, Costco here I come. 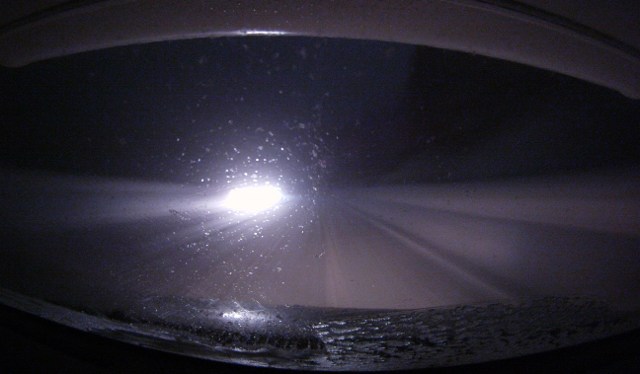 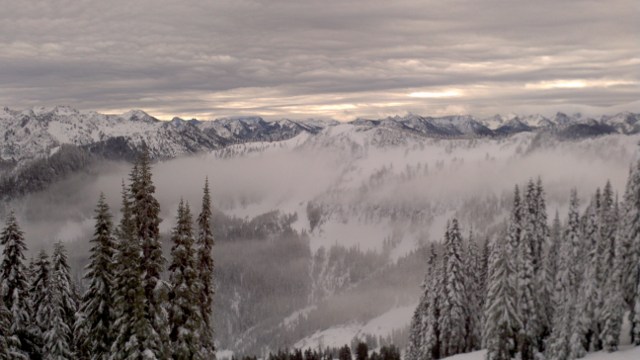 Beautiful view over the backside of the hill 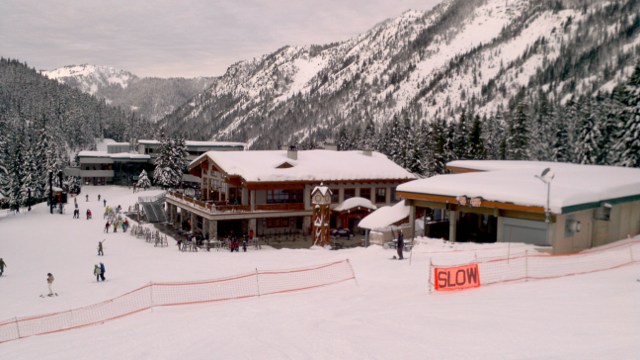 Pretty generous base facilities, but appropriate for the type of crowds this place attracts on weekends I'm told. 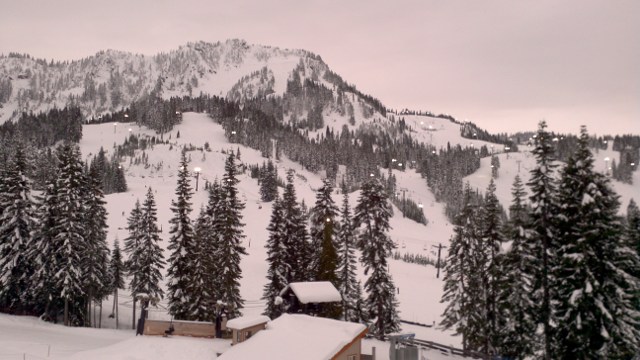 A good chunk of the hill is lit up for night skiing. Not something that tickles my fancy though.