After taking leave of Owen, I returned to continue visiting my Kelowna relatives, but good fortune having more of the clan arriving while I was there. While I knew I should be making progress I couldn’t help but take this relatively rare occasion to visit a bit longer. Thus I ended up only heading north to Silver Star on Sunday afternoon. At least I made some progress in further cutting of insulation pieces. A good thing too, as I was about to discover. After little more than an hour’s drive I arrived at Silver Star and some fairly cold temperatures. Although a sign said no RVs allowed (in the resort at all? didn’t seem to make much sense) the place was all but empty and there was another camper already there, as well as several cars which had clearly been there for more than today.

I awoke to thick clouds, a good helping of fresh snow, and more coming down. That and -15C which is starting to get a bit cold. The village at the base area belies the cold, with purposefully bright, almost eclectic colours on old west styled buildings giving a bit of a Disney feel. This and some of the details around made me think this would be a particularly good ski vacation destination with smaller children. As with sister resort Big White, this village was ski through, a concept which I thorougly enjoy. Although the mountain is just outside Vernon and so close to Kelowna, both significant population centers, the place had more of a destination resort feel. The substantial 3000 acres certainly speaks to that effect, as does a 50% share of high speed lifts (albeit that is from a small total of 6). Under-served terrain is a good thing in my books mind you, since it means more terrain per chair, meaning in turn the snow doesn’t get cut up so quickly. Although on this cold, midweek day that wasn’t an issue as there was hardly anyone here.

Tours start early here, a system I like since it means I don’t have to waste any time hitting part of the hill twice. I joined a family of four and our guide and set off. Silver Star’s 3000 acres combines with a layout offering several facets to give a feeling of “it just keeps going”. During the tour we covered some semi-open bowls, found some great fresh snow through well gladed trees, and no shortage of good groomers. There is alot of good intermediate terrain here, supplemented with plenty of black and double black primarily in the newer backside of the ski area, thankfully serviced by a high speed chair for once (it seems to be en vogue to service the expert terrain with old fixed grip chairs in so many resorts). Speaking of modern chairs, one feature I saw here for the first time is automated gates to control when the skier loads the chair. Although I have heard a couple lifties say that it helps, I’m not convinced they are really useful. In my time as a lifty, the timing of moving into place to load was not an issue, it was more people not being ready when the time comes, or not loading in the correct place.

The morning tour provided a basic grip on the areas of the mountain but there was clearly so much more to ski after lunch. But not before buying a face mask. Despite my face mostly being toasty warm thanks to a overly mature beard, our very attentive host noticed me starting to get frostbite on my nose at once point. I am quite grateful that he noticed as I had just thought it was warming up since my nose wasn’t hurting anymore. It definitely was not warming up this day. I joined my guide again after lunch, minus the rest of the group who had had enough of the cold for the day, and set out to explore some more. Although he suffered the usual restrictions of only being able to ski greens and blues, my guide was most accommodating. Paralleling my host, I got in some of the black terrain this afternoon, enjoying the fresh snow, but also finding the weekend’s main dump largely skied out, no doubt something that happened the day before as there was hardly anyone out here this day.

Despite my guide’s best attempt I didn’t feel I did Silver Star justice this day. I would definitely have liked a few more runs. I find myself wondering why Silver Star felt quite as large as it did, as the map suggests that alot of those 3000 acres are treed, reducing the realistically skiable terrain. But it does feel big. I can’t quite get a handle on how to take the resort either: as a major destination resort or a regional hill.  Some of the numbers and the destination style village suggest it is a major resort, as does the place’s history, being several years older than most resorts (the first rope tow was installed in ’46 and the first lodge and two more tows were put in place in ’58). Perhaps it was just the cold-induced slow day that was throwing my perception off, or the fact that I expected the place to be rather busy with American tourists, what with nothing much available in the usual high volume destinations of Tahoe, Utah, and Colorado.

The Whistler comparison then… somehow they seem hard to compare. Just a rather different feeling. If you’re looking for extreme terrain, Silver Star doesn’t quite deliver, though there are expert runs here for you. The atmosphere seems more family oriented, and the village a bit more… genuine. Silver Star is certainly a good destination visit, and I can see it being a competitive, even preferable option for some families, but overall Whistler does retain supremacy. Yes, Whistler is safe for another stop.

The cold certainly had me leaving my nice spot here in an effort to gain a few degrees down in Vernon. I couldn’t run my noisy generator here anyway, being near some townhouses, and I would need to given the cold meant my furnace was eating batteries quickly. (I was a bit jealous of the camper I walked by with his super quiet Honda generator purring away outside, though I didn’t hear the purr until I was walking right by it.) Down the hill I went, and spent a while searching for a spot to put down where I could run my badly needed generator. I found something passable and bundled my slightly sick feeling self up for a cold night in Vernon. 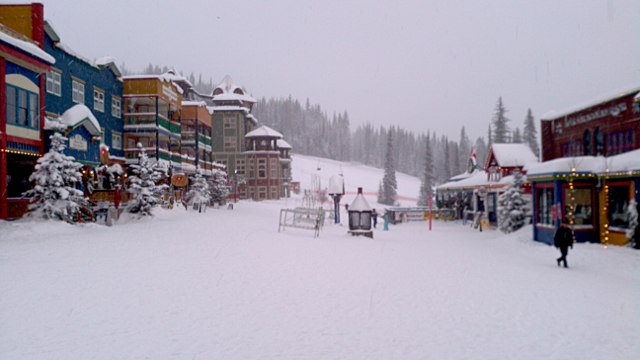 The highly styled base area village, described to me by one host as "hurdy gurdy".

Unfortunately the clouds meant no views, and the cold meant I wasn’t too anxious to get my camera out (which requires removing mitts), so that’s it for photos.