I had planned on skiing Revelstoke on Monday, keeping with my usual avoidance of weekends. But when I looked at the weather and say they had been dumped on the day before and the weather was looking decent for Sunday, I decided to choose powder over crowds and went for Sunday. I arrived Saturday afternoon, after crawling through a horribly plowed town and road up to the ski area, to find several RVs already parked on the edge of the lot. With almost the whole continent having a horrible season online recommendations were frequently sending people to Whistler and Revelstoke, so this wasn’t too surprising, especially with the massive hype Revelstoke has received for the last few years.

I awoke to nice high clouds and even a fair bit of blue sky showing, though the blue was somewhat short lived. No orientation tours here (a bit of a surprise) so I joined the overwhelmingly young crowd up the hill. As I soon heard, the reason for the large and rather energetic crowd was this was the biggest dump they have had all year. All the talk about going to Revelstoke because they’re having a good year clearly was more assumption based on previous years’ stats than current reality. While this dump certainly made for decent coverage, there were places where it was clear they were still suffering a show shortage relative to other years. I was also told that the day before was their busiest on record, with everyone rushing out to catch the dump of new snow. I found myself debating whether I would  have preferred  to be here yesterday to catch more fresh pow but have to deal with even more crowds.

After a couple warm up runs, I was at the highest lift serviced point (which doesn’t take long to get to despite the massive vertical, as a series of two… well, 2.5 really since you have to get off the lower gondola and get on the top section… high speed lifts get you there) and decided to follow the line of people taking a fairly tame hike to the North Bowl, which certainly looked to be the most interesting terrain according to the map. Good timing, as they had opened it just a little while ago (didn’t open Saturday) and I got myself a fresh line through some good deep powder. Finally! It was certainly a highlight run for the trip thus far, marred only by the rather long, tight, bumpy runout back to The Ripper chair, then a cat track back to The Stoke chair (and back to the hike). Quite a long circuit, and no doubt something that will be addressed with future planned lifts. I know the masterplan for this resort has always been very aggressive and impressive, they just happened to get rolling at a bad time economically.

A run through the south side alpine fields, which didn’t have many tracks through it at all, revealed heavy snow and thin coverage still. It didn’t take long before I felt I had covered the hill pretty well, a surprise given the 3100 acres of terrain. Alot of that comes down to the massive amount of trees, most of them listed as glades. I for one found alot of those glades to be a bit too tight for me, which nullified their suitability as skiable acres to me, but others who are more capable at tree skiing no doubt would fully disagree. As I finished my last couple runs I couldn’t help but think this place is very reminiscent of Whistler. Part of this was due to the style of facilities. The lifts, the signage were all but identical to those back home. Then one chairmate mentioned the fall line was similar to Blackcomb, and I realized she was quite correct. Alot of the similarities may come down to to the place being initially put together in part by Bones, the former mountain manager at Whistler.

The day over, I picked my way through the barely skiable coverage on the bottom piece of the mountain. I was stoked to have had a couple great powder runs through the North Bowl, but left feeling that the place has been overhyped a bit. A great place no doubt, but the hype has resulted in too much competition for space on the slopes, with every hard core skier running here. In my mind at least, something of a victim of its own success, much as Whistler is on busy days. In fairness, this may have been an unusually busy day given the conditions vs the season thus far. Also, my experience (at all the resorts I’m visiting) is of course coloured by the day I happen to visit, but much of what makes a ski area great is what percentage of the season is likely to be good days. Revelstoke is known for getting alot of snow, which means a good chance when you come here, you’ll get your powder day in. That is worth alot when you have to book a ski vacation ahead of time rather than choosing your time and destination last second, a luxury not many have.

Revelstoke has been touted as the next big thing ever since the current resort opened a few years ago, and the stats (especially at buildout) certainly back that up. But IMO it isn’t there yet. Of course being hard to get to will keep it off the mainstream but that is a good thing for those willing to go the extra mile for the good stuff. In time, it has the potential to knock Whistler off the top spot for those that are all about the skiing and not so concerned about a busy village and all the nightlife it offers. Let me be clear about one thing though: it may sound like I’m coming down on Revy a bit, and that is not my intent. I had a fantastic day here, but had come in with such unrealistic expectations, having bought into the hype, that it just couldn’t meet the vision. But hey, expecting to meet a Victoria’s Secret model avec digital touch-ups and getting the real Victoria’s Secret model instead (minor imperfections and all) ain’t exactly a bad deal.

My batteries all but dead, a load of laundry needing attention, and me with a badly needed shower landed me in a RV park just past the east end of town. It was actually all but closed  in the winter except for 2 spots, neither of which were occupied, but that was fine with me. I settled into the very picturesque spot among the trees and set about hooking myself up and dumping my full tanks. Unfortunately I set about it a bit too hurriedly and forgot the patch of ice I had previously noticed just in front of the RV. One slip later I was writhing on the ground wondering if I had just broken my tailbone and waging a losing battle against unconsciousness. It took me a good few minutes before I was able to work my way back into the camper, with images of someone finding me frozen leaning against the camper motivating me through moments of spinning clarity. This was NOT what I needed. An hour laying on my front and I could think and gingerly walk but sitting was not an option. The decidedly friendly camp operator came by with my laundry an hour after the power came back on (it had been down since I arrived). The shower would have to wait till tomorrow, when hopefully I would shake off the fall and return to my planned schedule. 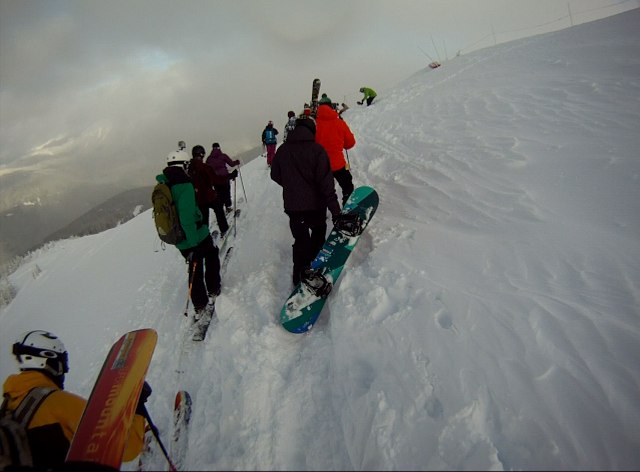 Seems like half the people here today were making the hike into North Bowl. Revelstoke definitely had a hard core crowd this day. 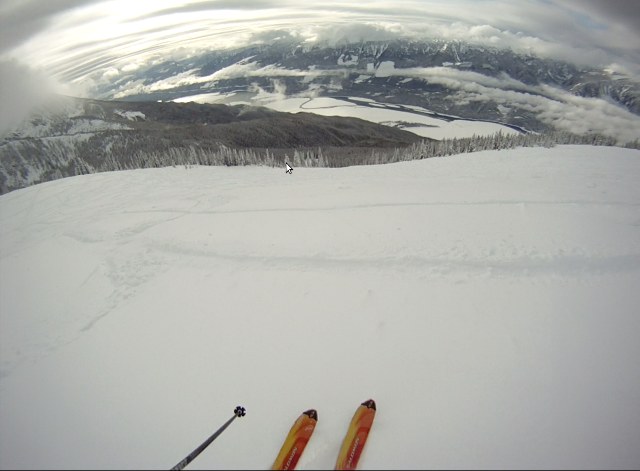 Fresh lines and a view to boot. Consider me a happy man. 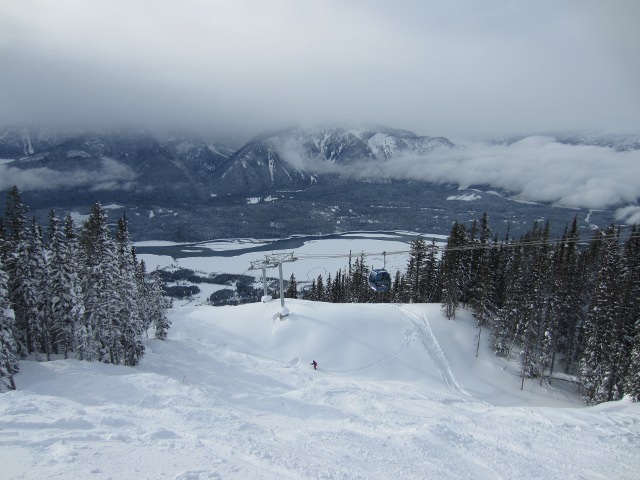 The gondola, which is the only way to get up and one of only 3 lifts here, but they are all new high speed models. There may only be a few lifts, but the view to the river valley seems infinite.

The view from the top of The Stoke chair. Although the sun is making its presence known, you can clearly see the storm that brought this dump of powder is still blowing at the top.

The north bowl, untouched in the morning, just waiting for me (and an army of other powder hounds) to arrive. 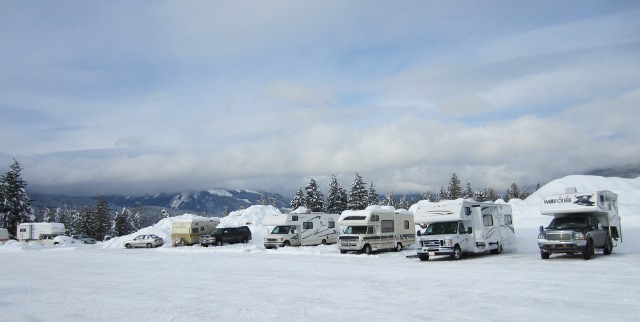 A beautiful spot to start the day... 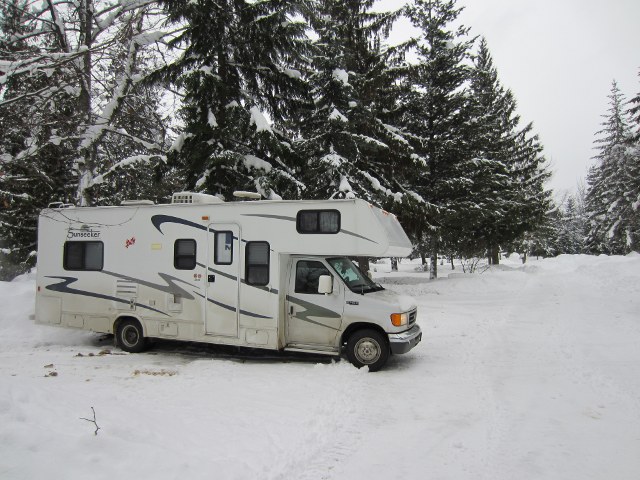 ...and a beautiful spot to end it. As the camp operator drove around the snow covered and empty except for me site, he towed his little girl behind on her sled. It was as if Rockwell had painted a Winter Wonderland theme.