The views did not end with the drive through Banff. My route southwest the morning after Sunshine Village took me out of Banff national park and into Kootenay national park. Another incredible day’s drive through the beautiful rockies, and on a bluebird day to boot. I was struck this day just how many of the trailheads were open for business. I passed one parking lot after another, all perfectly plowed and with a number of cars parked in each, presumably semi locals out for a day hike/snowshoe. I realize these parks are going to be major destinations for summer tourists, but the number of winter users was surprising to me. But then, I suppose if I liked near such a beautiful place and had access to these amenities, I would be out here too.

No, wait, I wouldn’t, because I have lived in a beautiful place with lots of winter and summer hikes for years, and have very rarely taken advantage of that lucky fact. That has GOT to change.

I finally left the rockies in grand style by passing Radium Hot Springs. The actual hot springs feels like something right out of the Lord of the Rings to me. Eerie. Unfortunately I didn’t have time to take a dip as the day was wearing on and I still had a ways to go. Only thing I did stop to do in Radium was to pick up a park pass to satisfy the condition on the notice of violation I got this morning. They have people to drive around to all their trail heads and pass out tickets, but nobody to man the info centers or toll booths so you can actually buy a pass (other than the one here in Radium). I had figured that park passes only applied in the summer. Go figure that one out.

Not much later I pulled through the small and seemingly unplanned town of Invermere, the nearest town to Panorama. Climb a few kms roughly west and Panorama comes into view, a small village at the base of big ski hill. And yet, it comes across as a much larger operation than the town size would suggest. They definitely have the bigger resort amenities all taken care of. A gondola connecting additional parking lots and a bunch of outdoor facilities (tennis etc in summer) to the upper village, a fancy central rental accommodations check-in, a substantial set of buildings holding ski hill services at the base of the main lifts, a central recycling and garbage drop off… all the conveniences and facilities I only expect of a bigger place.

But then Panorama isn’t a small place. 2800+ acres and 4000ft vertical  plus regular  visitors coming in all the way from Calgary are good signs of that. Though I had to admit, I’ve seen a number of resorts in the mid 2000 acres range which here decidedly lower key as far as amenities go. As is the history of racing here. Panorama has hosted World Cup events, and has well attended athlete training programs, right up to World Cup level. Walking into the rental & repair center at the base of the lifts I see signed posters wishing World Cup racer Manny (Manuel Osborne) good luck, something I would see several times throughout my day. I also run into a couple girls on a chair that were there for the weekend all the way from Calgary for training… a trip they make every second weekend. I quickly find out this isn’t unusual. The extra 2+ hours to get here rather than Lake Louise certainly says something about the racing program here.

I of course wasn’t here for racing, especially with my tailbone still rather tender. And since they hadn’t had new snow in a few days that only left nice weather to look forward to. Waking up presented nothing but low cloud cover to me however. Thankfully the large vertical at Panorama took care of the problem this day, as the clouds broke about half way up the second chair, and brought me to flue skies and an incredible vista across the valley where Inveremere sits, to the Rockies running both ways as far as the eye could see. To the naked eye at least, it appears to be an almost unnaturally straight line of mountains too.

After a couple warmup runs on some nice but solid grooming, I took up with several other guests for a orientation tour. The host program here is quite popular I’m told, with a rather strong tendency being guests that come for a tour (or 2) every day of their stay. Something we don’t get alot of at WhistlerBlackcomb. Being a weekend, there are several people up for a tour this day, with our tour guides being a rather happy bunch.

Of course, you can’t cover all that much group in a tour group, so I grab my lunch back in the RV and prepare to head out on my own for the afternoon, as usual. But not before picking up my skis which I dropped off before lunch at the tuning shop, with an order for edge sharpening, a wax, and a badly needed base grind and repair. Part of me really wants to just buy new skis instead of spending money getting these ones workable, but I am worried that I would just destroy them on rocks again, here or elsewhere.

And there are plenty of rocks. The groomed terrain is generally all in good shape (other than getting fairly scrapped up to show the hard pack underneath, and I do not ski well on hard pack… even with new edges), but their somewhat hyped Taynton bowl, where much of their double black terrain lives, has its share of rocks to avoid. There is a fair bit of nice snow left mind you, near the top of the slops in particular. Given it has been several days seen a good dump of snow, this is a decent achievement.

In a way Panorama doesn’t feel quite as large as it is. I got the feeling this was because of all the different faces and areas the hill has, as opposed to the open space of Sunshine. And yet the separated areas at Louise made it feel bigger I thought. Not quite sure why that is. Perhaps it is just that all of Panorama is treeland and below, and that keeps areas visually separate. No alpine terrain here.  On the positive side of the segmented mountain, I kept feeling like I was discovering a while new area each section I hit.

I quite enjoyed the one run I had time for through Taynton bowl. This and a few runs right off the “old” side of the peak are where all the double blacks are, but they are almost all varying densities of tree skiing. If you like tree skiing, Panorama definitely has you covered. Taynton adds some slightly more open terrain to the expert level mix, with some semi-open bowls between the trees. Unfortunately there is a decidedly long cat track back to the lifts.

One of the nice things about Panorama has the mix of terrain. It felt like it had a better selection and amount of blues and greens than many of the results I have seen, which gives families of varying abilities something for everyone.

Panorama, with its acreage and vertical, and well stocked village is one of the easier comparisons to Whistler I have come across. In this case I would say Whistler maintains its superiority, partly due to the bigger variation in expert terrain, the existence of alpine terrain (which tends to be my favourite), and because while Panorama has all the trappings of the mega resort, it isn’t one. Something feels slightly at odds about that. However, that is a fairly strong personal preference. Others will no doubt prefer this smaller package (including smaller crowds of course). I certainly ran into my share of people during the day who had come here from overseas for the 3rd or 4rd year in a row, so alot of people quite like the way Panorama works. 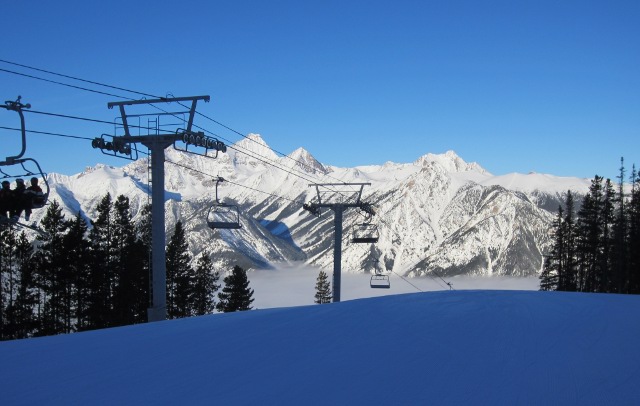 Breaking through the clouds revealed a perfectly sunny upper mountain. 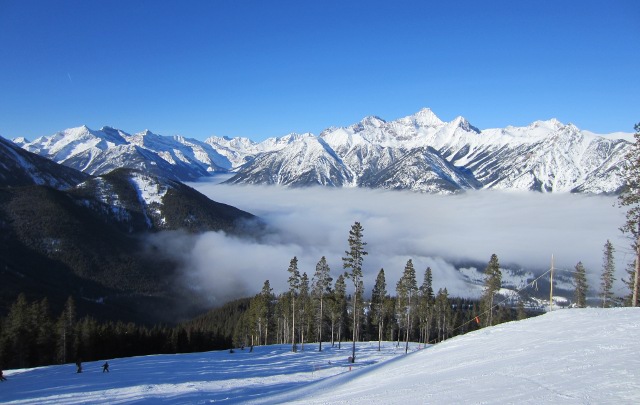 Looking west from the top 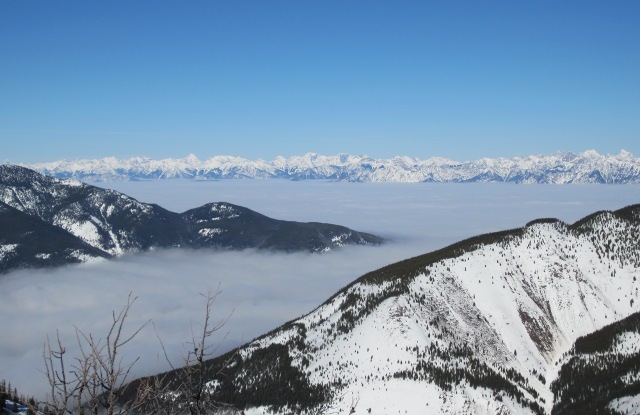 Looking east to view the Rockies on the far side of the valley. 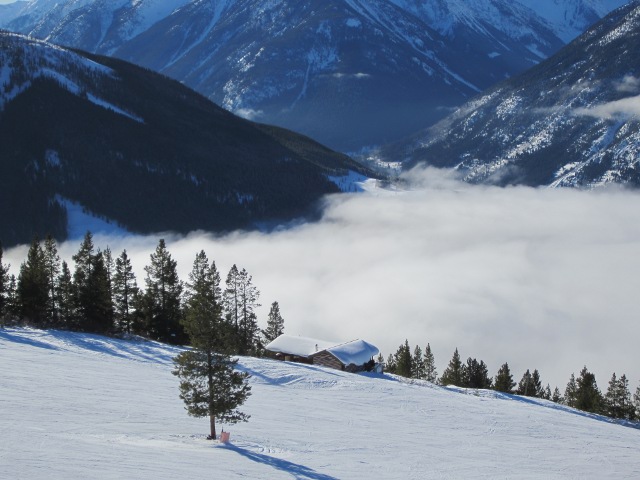 An old on-hill cabin that was recently closed after being used as an eating place. Considering how incredibly picturesque it is, I do hope they reopen it.

From the top of Taynton bowl, a recently opened area with a bit of a backcountry feel. Some interesting terrain here, but as is so often the case, you do have to hike a bit and the return run is long. 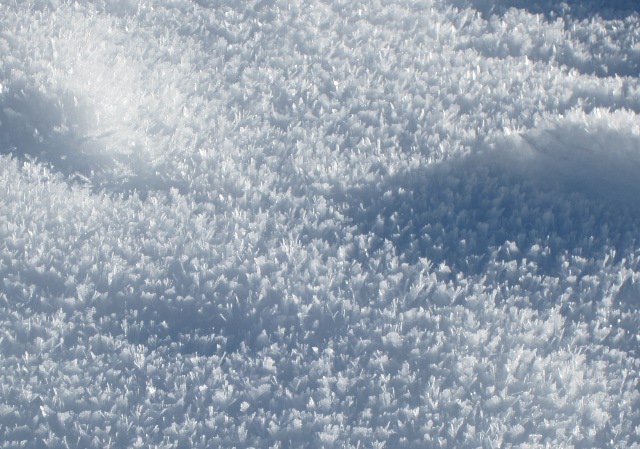 The rather warm afternoon sun had rearranged the snow into this incredible sea of fine flat ice shards. Although they skied somewhat like slush, they were extremely fine and would fly away with a little blow.