After taking my time getting out of the Lake Louise campground (it is hard to say goodbye to shore power) and thankfully taking care of my tanks as the plow finally cleared the facilities, I started on what I knew was likely to be one of the most memorable legs of my journey: the Icefields Parkway. I drove this road before, heading south, on my motorcycle back in 2006 and the memory has stuck with me pretty hard. It is an incredibly beautiful drive, and I suspected it would be just as, if not more, spectacular in winter. Of course, there were alot more people on the road in ’06, being summer. The highway was near deserted this time, due in part to the road condition being rated poor, with travel not recommended. But the forecast was decent and I had little choice, so I got rolling.

I understood pretty quickly why the rating of “poor”. The road was fully covered in snow or solid ice for the most part. Thankfully the RV handles such surfaces very well, thanks no doubt to sheer weight (it isn’t like I have some highly rated proper snow & ice tires). It also helps alot that the road is very easy to drive. What few curves the road has are usually slight and virtually always well banked. There isn’t much in the way of speed grades either. This is definitely a well laid out and engineered road. It was also well plowed, though I’m sure that wasn’t the case a couple days earlier when I originally planned to do this drive. it was still snowing lightly in some places, but visibility was good, and the winds had died down alot, so I made good time.

It is a good thing the highway was as deserted as it was, since the views mean I didn’t pay nearly as much attention to my driving as I should. The Rockies are world famous for good reason. There isn’t much point in describing it all since it is beyond any words I can craft, and even all the photos below don’t even come close to doing it justice. Besides, I eventually realized that as much as I yearned to share this incredible vista with people, you have to see it for yourself, so instead I encourage anyone who hasn’t been here to do the drive. You can do it in the summer like sane people if you want, it is beautiful then too.

The lack of cars on the highway wasn’t the only thing that made this place deserted. It is very much middle of no-where, and being midweek meant no weekend hikers were at the trailheads (yes, people actually drive into remote places like this in the dead of winter just to spend a day snowshoeing), and virtually all the many Parks Canada facilities and parks are closed for the winter, barring the odd plowed parking lot and pit toilet. Even Icefield Center and The Crossing, the only two significant human outposts were closed for the season. I had my moments where I wondered what the hell I was doing out there.

Despite making pretty decent time and only a short stop to make a sandwitch at the Weeping Wall (how many people can say they’ve done that in winter?) where a TV crew from Planeta Extremo (Brazil) were filming ice climbers, the trip took a while. It is some 230km after all. I found a nice little parking lot at a trailhead just 2km from the ski area turn off (south of the Jasper townsite) a bit before dusk set in. What a perfect place. No-one around to bug with my generator, reasonably flat (very important in an RV that doesn’t have built in levelers), a short, almost flat drive back onto the highway if it snowed overnight, and with the road being so lightly traveled, I knew road noise overnight would be all but nonexistent. And of course, the all important cell signal. Most of the highway has no service. I made use of the newly returned cell signal by making a work call while hiking thru the woods to the pretty little (frozen of course) creek and clearing that is the first of many destinations on this trail system. It was certainly one of those moments where I realized how great the pros of my career are.

The morning didn’t quite bring the beautiful weather that had been forecast for the last couple days, but the clouds were high leaving decent visibility so I wasn’t complaining. The drive up to the ski is not insignificant at 13km, but was well plowed and for the most part relatively tame. There was no shortage of space in the parking lots (which you can’t stay in overnight, boo) which are all conveniently situated to be ski-in/ski-out. No big hike to the hill needed.

After a couple quick warm up runs and even a short hike to get some glorious fresh trails down a small bowl, I got what turned out to be another private tour by the mountain host on duty that day. I was told they don’t get many people looking for tours midweek. And that’s where my misconception of Jasper began to unravel. I had always thought Jasper was a big ski town, and as such there would be plenty of interational destination tourists skiing midweek. But Jasper is a rail and general tourist town that happens to have a really nice regional ski hill nearby. People come to Jasper to see Jasper, not to ski. My guide, Ruth, even explicitly said that locals all think of Marmot as a local ski area, nothing more. Still, all the new quad chairs, mostly high speed, and the rather generous 1675 acres and 3000ft of vertical suggest more than a local hill.

All the great terrain also flies in the “modest local ski hill” self image. There are plenty of alpine bowls, some fantastic glades, and plenty of wide open runs for those who like a wide cruiser. Not to mention all the additional alpine available if you are willing to hike a bit. I managed the hike to Cornice, much to my tailbone’s chagrin given how steep the bootpack got, and enjoyed virtually clean lines way down into the bottom of the main basin. Though that really wasn’t necessary this day, as there was tons of nice powder almost everywhere, and while it did get progressively more cut up as the day wore, it wasn’t so busy that things every got unpleasant.

Service seemed a bit inconsistent. Some staff were pleasant and polite, while others seemed like they didn’t really want to be there. Maybe it was just Hump Day doldrums.

The place feels bigger than its acreage, but that will mostly be because alot of what you see isn’t accessible, mostly due to avalanche danger. I found it a fairly easy place to get the hang of, what with most if the ski area being visible from the top of the Eagle Ridge chair. I had more or less managed to ski all areas to my satisfaction by 3 oclock, but had to go back for a few duplicate runs because the snow this day was just so nice. Given the elevation and location, and the fact that my guide mentioned it simply never gets rain above the base, I imagine that isn’t particularly unusual.

Oh, did I mention the views? While not quite as in your face as at Lake Louise, you are still in the Rockies and thus are surrounded by natural beauty while you ski. Be it the view down to the town of Jasper, or the rocky mountain peaks on all sides, you can spend plenty of time just standing and looking around when you get off the upper chairs especially.

While my day of skiing was done, I couldn’t pass up a visit to Jasper just 15km north. It was much like what I remember from passing through a couple times in summer. Very charismatic, with a great job done of keeping the place feeling like old times. Even the big name chain stores all applied the style of “shop in little old town”. I was particularly enamoured by the row of very original looking houses maintained along one street across from the rec center. How I love the idea of living in such an old house. On the other side of a different coin is something else I thought was very cool: a large laundromat that featured wifi and coin op showers. Though I suspect it was targeted at backpackers, for anyone traveling like me it is quite the slice of heaven taking care of 3 things at once. However I had already made a stop at the rec center to shower up and take a nice soak in the hottub.

The town itself not being RV friendly, I grabbed some groceries from the sparse selection at one of the two rather small grocery stores and made my way back to the same parking lot for the night, stopping once to take care of a fuse that decided I didn’t need headlights at night on a dark highway. Come tomorrow I would need no headlights to enjoy the spectacular winter Rockies views heading south. 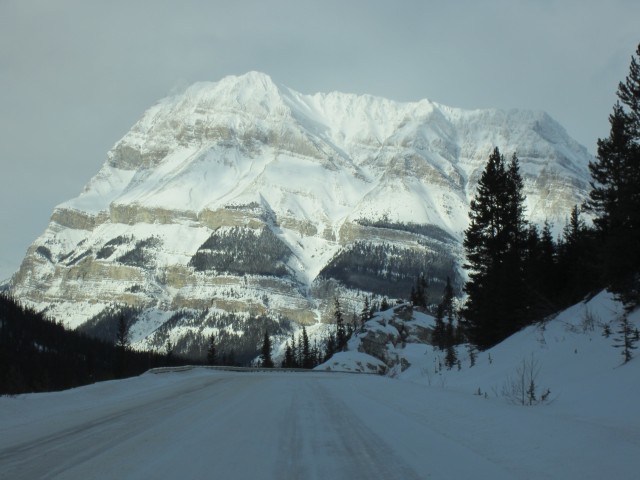 The Parkway doesn't exactly ease you into the views. This is right near the beginning. 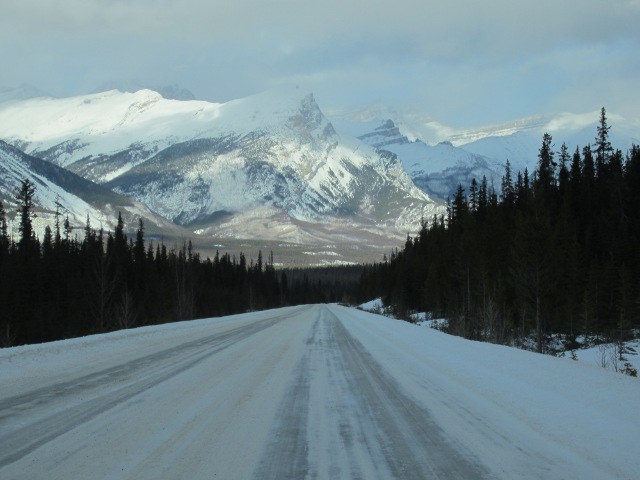 The road doesn't look in bad shape, until you realize the clear-looking strips are at least an inch thick of sheer ice. 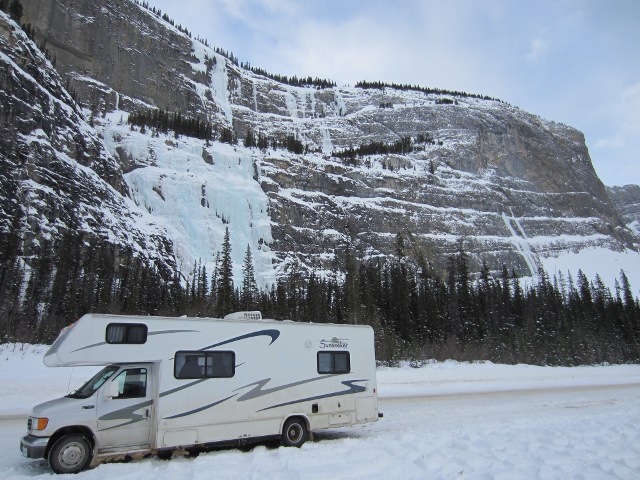 Stopped for lunch at the Weeping Wall, roughly half way. 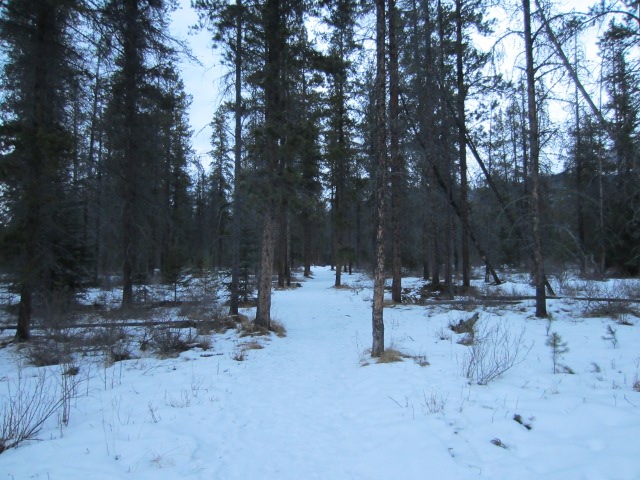 Walking along a little trail right by where I am parked for the night and providing tech support on the phone at the same time. Sometimes my job is really awesome. 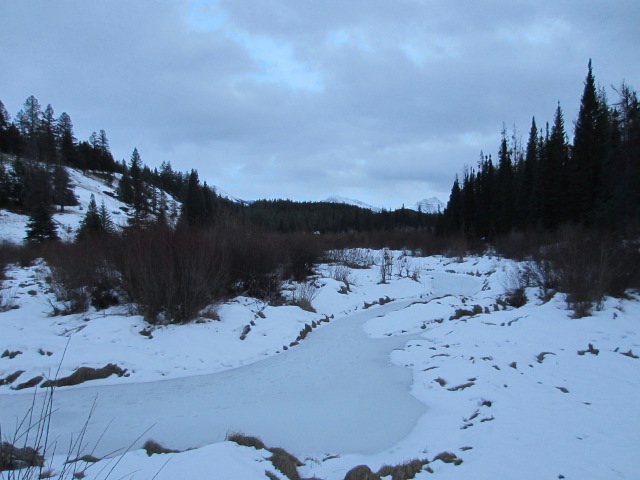 The payoff for my short hike, a raised boardwalk across a meandering (frozen of course) creek in a surprisingly tranquil little valley, relative to the severe landscape surrounding it. 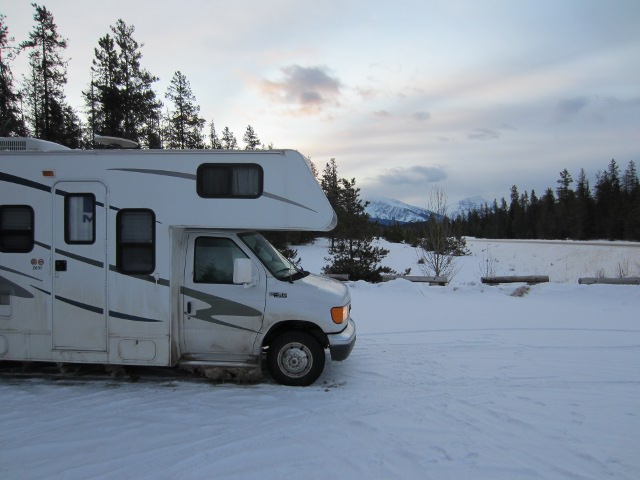 A near perfect spot for a night of boondocking. No-one for at least10km to disturb, just off an all but deserted freeway, flat, and no concert of getting snowed in overnight. All of 12km to Marmot's base area tomorrow morning. 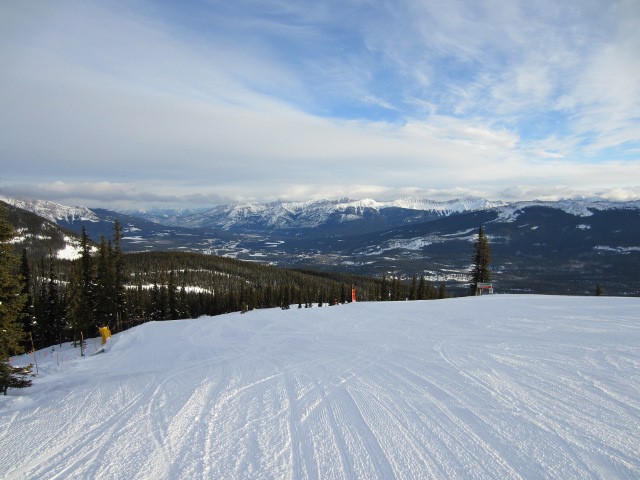 Looking north with the small town of Jasper visible left of center. 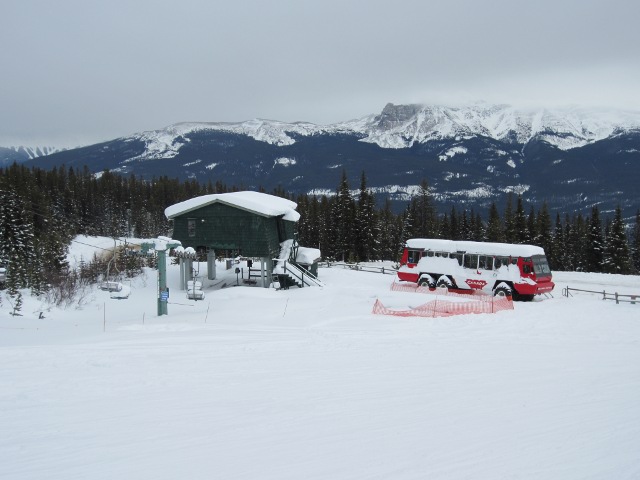 The Caribou chair, not rent useless thanks to the new high speed chair that parallels it, and one of the glacier buses used for tourists in the summer. 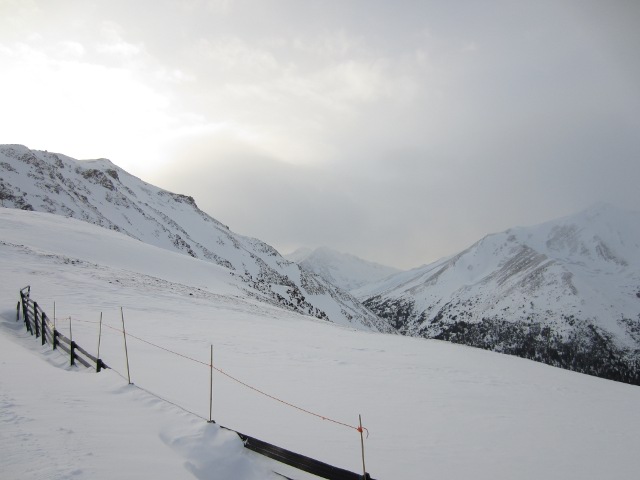 From the top of the new Paradise chair looking roughly west over the ski area boundary. On the far size of the ridge on the right is the Jasper gondola, open in summer only for sightseers.

A couple minutes hike past the top of the Eagle Ridge chair. Click for larger view. 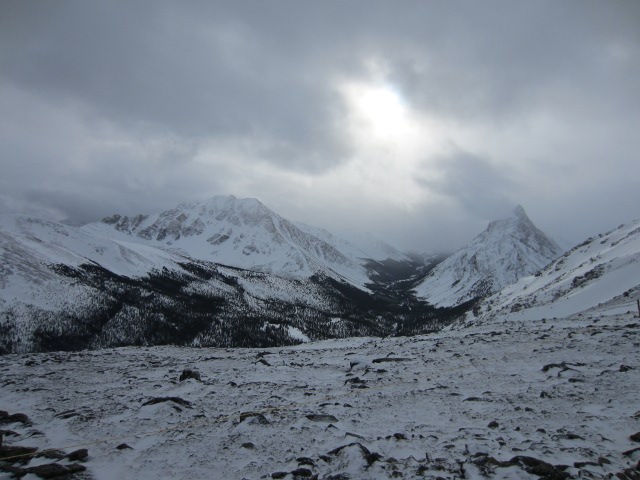 Continuing the hike a ways, including a tailbone-wretching steep bootpack to the top of Cornice, looking into yet another valley heading southwest.

From the top of Charlie's Bowl looking east. Eagle Ridge, where a couple other photos come from is to the right of center, and the base area is to the left of center (not visible below the near horizon). Unfortunately most of the fantastic looking bowl to the right is permanently closed due to high avalanche danger.