But Lake Louise ain’t no one trick pony. This place has more to offer than some of the most spectacular views anywhere. For example a massive amount of terrain, and some very stereotypical (in a good way) Canadian style.

Having completed my brief but lovely tour of the Lake Louise township and the famous lake itself, I made the very short drive across the large valley to the base of the ski area in the morning. You are greeted with the oh so iconic log lodge, which acts almost as a gateway to the ski area, as the two main access lifts sit just on the other side. Mountain Hosts (or as Lake Louise calls them Ski Friends) were all over the place, so I quickly got the 411 on where and when to meet for a tour. Thankfully I also quickly and painlessly unloaded my extra ticket this time.

A quick look at the map almost left me overwhelmed. This place is huge. And it isn’t just big (4100 acres), it is very multifaceted. It almost feels like 3 resorts. You have the front face on the south west, then the massive bowl(s) on the north east side, and a cozy feeling (not so many massive views) valley on the south east end of the resort.

The history here feels pretty big too. Some of that is just the style which Louise works to maintain, be it the main lodge I already mentioned or the retro Temple lodge in the bottom of the Larch valley (this is where the ski area began, but the current lodge is not the original one). Then there are what may be unintentional pieces of history, such as the Olympic chair which is still on the map but hasn’t turned in some 10 years, and the remnants of an old T-bar which has quite clearly been abandoned for well over 10 years.

After a couple easy warm up runs that confirmed a slightly (but only slightly) less sensitive tailbone, I went on the orientation tour along with a group from the Bear Valley Ski Club (California, south of Tahoe, and a ski area I had really wanted to visit on this trip as I have been through there in the summer and found it absolutely charming, but time simply isn’t going to allow it). As a Mountain Host back home, groups like this are by far my favourite. Everyone is comfortable around each other, in good spirits and not shy. On the flip side you have groups made up of singles and couples where no-one asks a question or shares an opinion for shyness, and I end up not knowing if people are having a good time or bored or annoyed at my tour style.  This however was a great group and I was quite happy to have been along for the ride with them. The three guides we have with us were all good lads too. Given the clouds and flat light at the top of the hill, it was good to have a guide to start the day off with. Only problem is the ski area is just so big that a two hour tour isn’t quite enough time to see everything. What a wonderful problem to have.

After lunch I struck out on my own to cover the rest of the hill, culminating in a fantastic run through a ton of great powder (not exactly uncut like in Kicking Horse but plenty of fluff to keep me very happy) down Boomerang Bowl. Considering it had been (I was told) super busy the day before, and it hadn’t snowed a ton that night, I was impressed by how much snow remained. Partly the result of the wind blowing snow off the front face (as evidenced by several parts which are decidedly icy or windpacked) and depositing it kindly in the bowls on the backside. No wonder they call them collectively as Powder Bowls.

Of course, the great selection of terrain and good snow almost paled in comparison to the views. OMG the views. Everywhere you turn is a spectacular Rocky Mountain vista. It seems like they must have chosen the ski hill because it is the only one which isn’t unskiable. Everything around is as severe a landscape as you can imagine. Huge peaks with half their vertical comprised of cliffs surround you. And of course the world famous Chateau Lake Louise is visible across the valley. Assuming you can see anything that is. Thankfully this day the weather mostly cooperated. Not just the clouds but the temperature. Lake Louise is somewhat known for some mighty cold weather, and one of my guides confirmed they usually do average a couple weeks a year of -30C or so. As always, your experience at Lake Louise is tied to how Mother Nature is feeling while you visit.

I’m surprised that I don’t hear comparisons of Lake Louise to Whistler more often. They are both iconic Canadian ski resorts… possibly THE icons. Given the very international guests I ran into and heard here the resort is definitely very well known outside of Canada (both the lake itself and the ski area). Louise has some pretty special things that Whistler simply can’t claim, namely the Canadian styling and the views. But I have to remind myself that, Whistler’s style is also very nice, just not quite is old fashioned. And Whistler’s views are pretty spectacular too, just not so severe. Ultimately both resorts are fantastic and definitely on a similar level… just different.

No overnight parking at the ski area, so I drove back to town, to an evening of doing laundry at the Lake Louise Inn (the only place in town with coin washers I’m told) before treating myself to a night of power and a hot shower at the Lake Louise Campground, which operates 30 of their 189 trailer sites all winter. Just be warned, you may be shoveling your way into a campsite if a recent dump has meant they are behind in keeping the place fully plowed. You may also be the only person there. 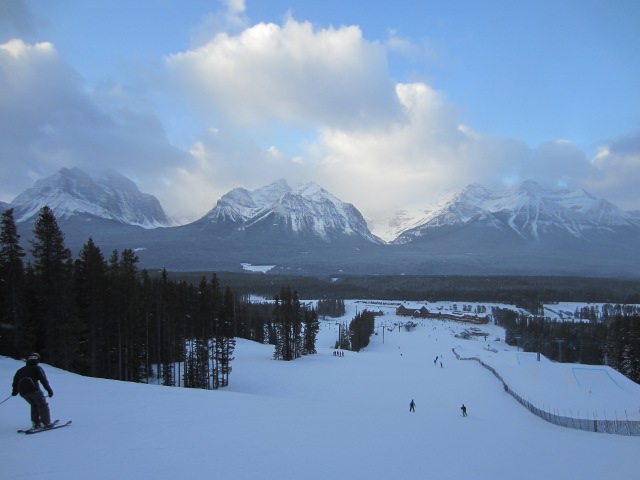 The view that greeted me on my first run of the morning.

The base area at Lake Louise, with the iconic loghouse daylodge. 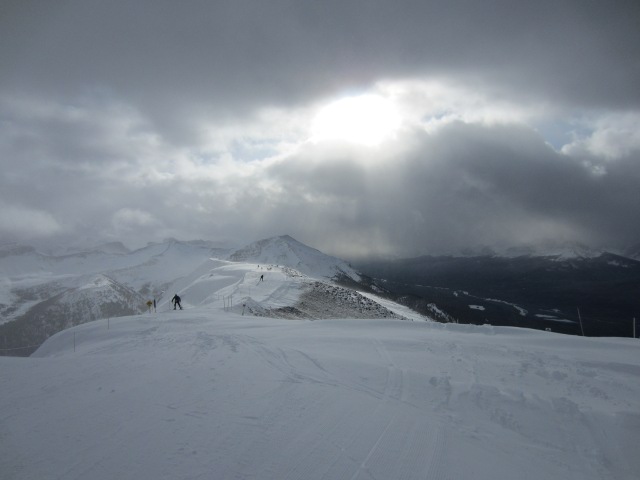 Looking south east along Eagle Ridge from the top of Paradise chair (I think). 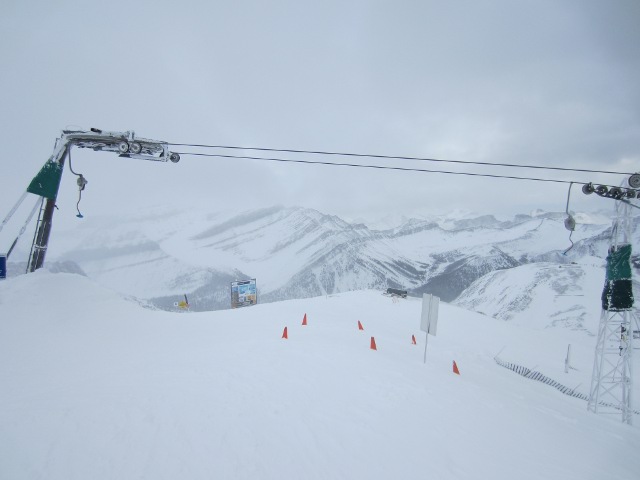 At the Top of the World platter lift looking east into the backside... 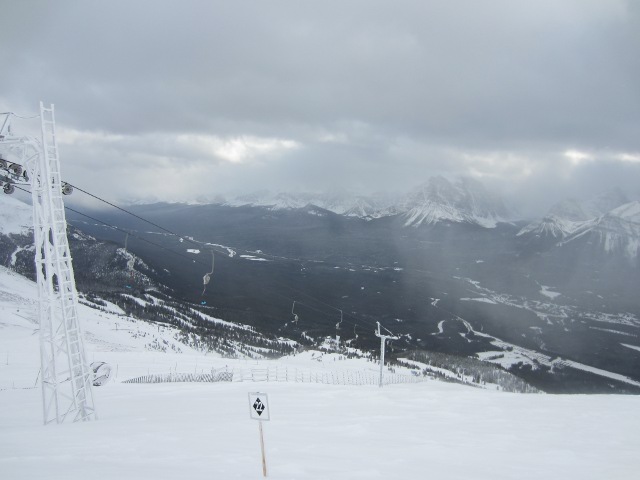 ...and looking south down the front side. 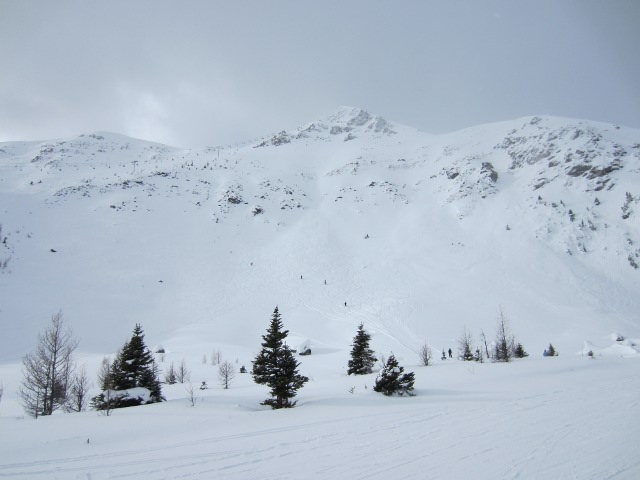 Looking up at Paradise bowl, which gave me and the rest of the tour group a fabulous run through fairly fresh and reasonably deep powder. 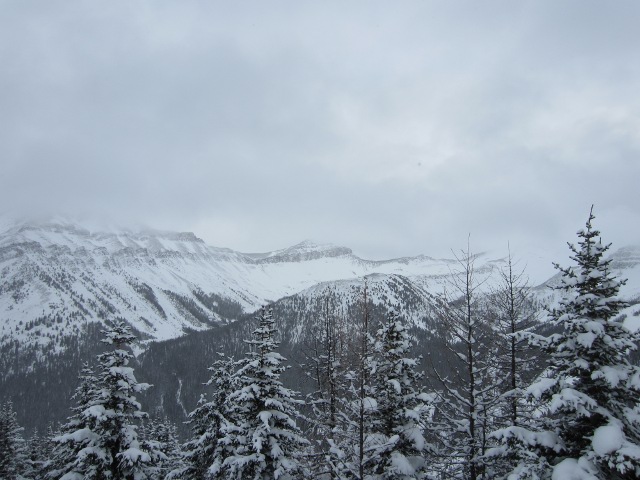 From the Ptarmigan chair looking north of the Larch area. 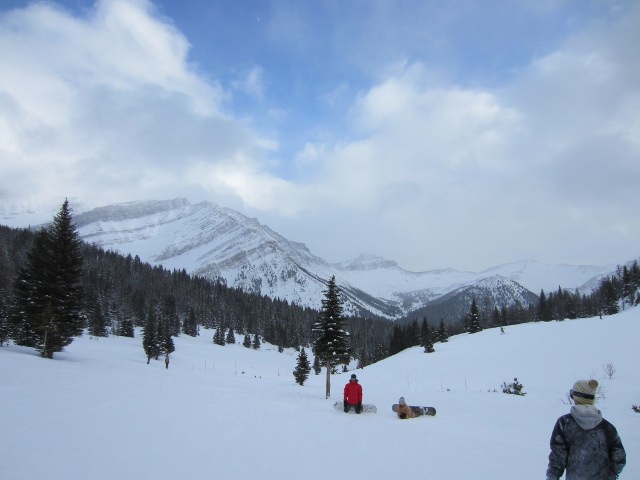 Another view towards Larch, this time from the bottom of the backside, on the run back to the Paradise chair. 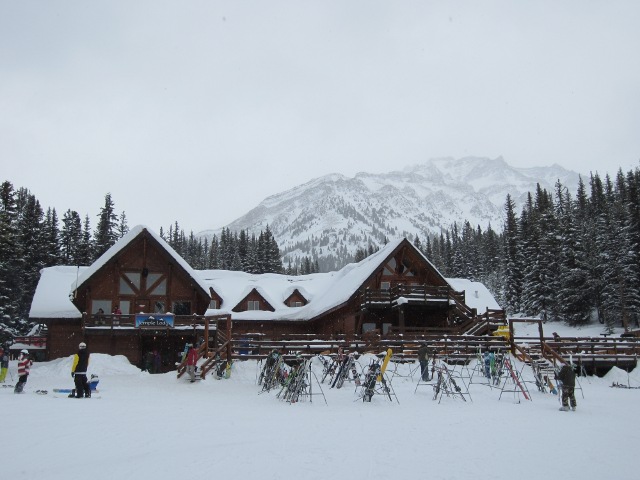 The current incarnation of the Temple lodge, at the bottom of the Larch and Ptarmigan chairs. The original lodge was built in 1936 and was the ski area base, although a lift wasn't actually installed until 1954. 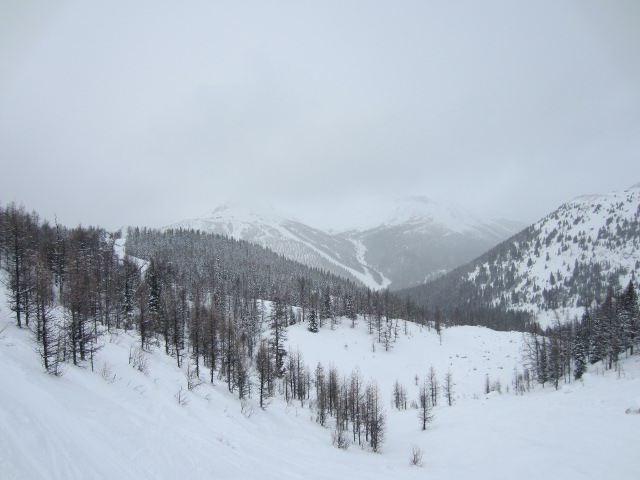 Looking back towards the exit of Louise's backside from the Rock Garden, a debris field of rather large rocks left over from a rock slide, presumably a long time ago. It somehow feels very playful.

Still in the Rock Garden, this time looking northeast (or maybe just east). You really can't look anywhere at Louise without finding a spectacular view. Unfortunately these photos really don't convey just how grandiose the views are.

Perhaps the most famous view other than the iconic Chateau, looking at the Lake Louise townsite from the front side of the ski area, with the three typical Rockies mountains in the background, Lake Louise proper nestled between the two on the right. 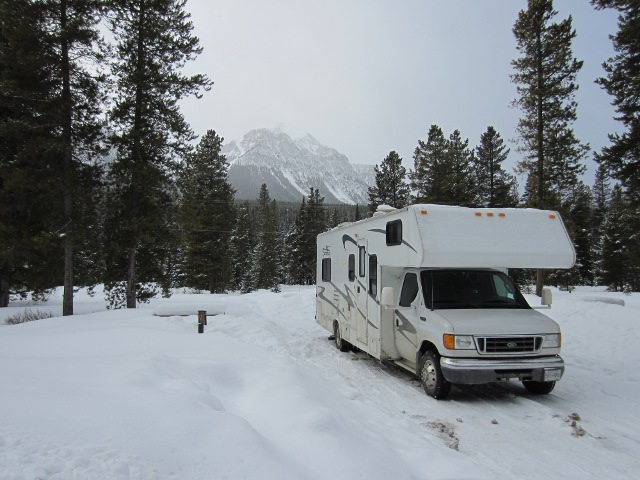 A beautiful campground with excellent facilities (except the sani station was half closed) and a killer view to boot, right next to the town.

Near the top of Boomerang Bowl at the end of the day, looking east-ish down the resort's backside. Click photo for larger version.