I would stay another night in Kicking Horse, as you can’t turn down a free parking spot, power, and 5 bars of cell signal. Not to mention an office view across the valley and the town of Golden. When I did get rolling, I discovered the road from Golden to the Icefields Parkway is quite spectacular. Yet another stretch of Highway 1 that spends much of its time quite precariously hugging cliff sides. It does less meandering of valley bottoms now that they finished a new section including a rather spectacular bridge that I’ve driven by a few years ago while under construction. There certainly were not alot of people driving this road and enjoying the views. I suppose most people have more sense than driving in such remote areas in the dead of winter. Eh, their loss.

When I got to the junction of Highway 1 and the Icefields Parkway, I realized that the trip was a fair bit longer than I thought I had read on the GPS (it must have quoted distance as the crow flies). I went to find the first place I could to stop and consult the internet for road conditions, and the first place turned out to be the town of Lake Louise, which was awash in weekend tourists due to it being the final day of the annual Ice Magic Festival. I found a place to park and soon found thanks to the trusty internet that the highway north was not in great shape at all. I thought better of continuing (it was already past 3) and decided to ski Lake Louise tomorrow instead. One of the many traffic coordinators told me overnight parking was available in the town so seemed like a sensible plan to call the day’s traveling done.

It seemed like a bad idea to waste such a combination of events, so I one of the free shuttles to the lake itself where the festival was being held. The festival centered around an ice sculpture competition. The previous weekend several teams had put their skills to blocks of ice and come up with some truly impressive (and sizable, not exactly the salmon or swan you see at buffets) works of art. The selection wasn’t massive, perhaps a dozen pieces, plus a rather large ice castle facade in the middle of a large ice rink of the lake. I couldn’t help but think how much my one ice skating niece would love this. I found myself wondering how this small display could attract quite so many people… the place was packed, even at this late hour when all of the scheduled activities were done, travelers from Calgary would be wanting to get home, being a Sunday and all. Though the range of languages I heard and the number of people that seemed to be staying at the Chateau, I realized there were alot of destination tourists here too, interesting given how few tourists I had seen in the resorts so far, with the possible mild exception of Sun Peaks. Then I also realized why the big attraction: this winter wonderland, with the big hotel on the shores of the big frozen lake, surrounded by big mountains and a glacier in the distance… this isn’t exactly normal to most people. I’m lucky enough to live on a frozen lake with mountains in the background that I look at every day, but to many this is once in a lifetime spectacular. A reminder to count my blessings.

My unexpected touristy activities done for the day, I picked up fuel (oh how I love cheap Alberta gas… and gas stations on opposite sides of the street with a $0.11 per liter difference in price), found myself a tiny parking lot servicing one of the cross country trail system entry points, and called it a night. Good thing I don’t mind trains because the tracks around here (right across the street in this case) sure are busy.

Panorama taken from the edge of the lake by the Chateau Lake Louise, with the festival activities to the left of center. Click to view larger version. 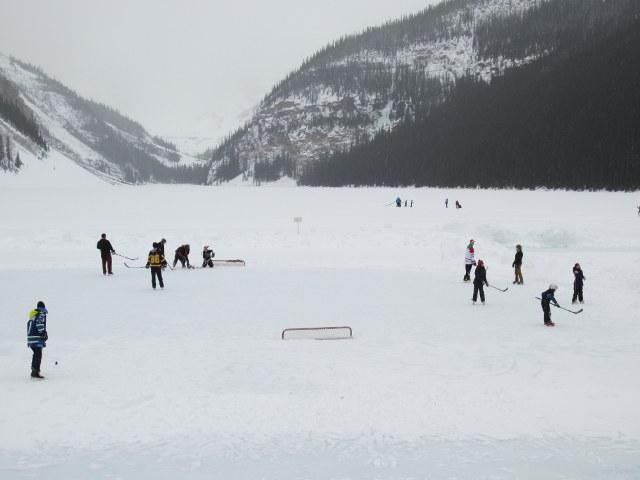 Does it get any more Canadian than this? 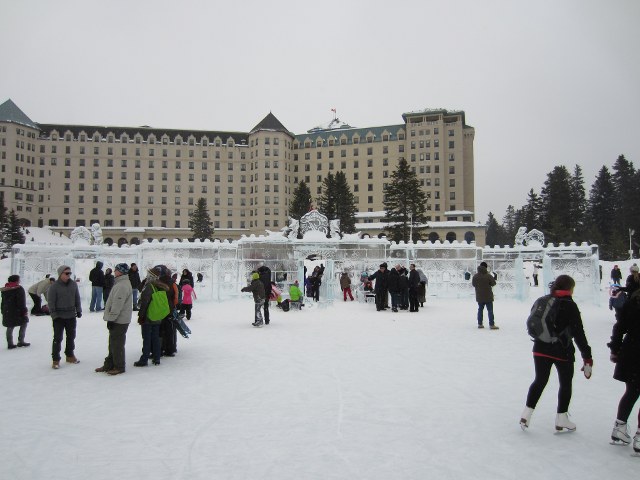 The ice castle in the middle of a large skating area on the frozen lake, the iconic Chateau Lake Louise in the background. 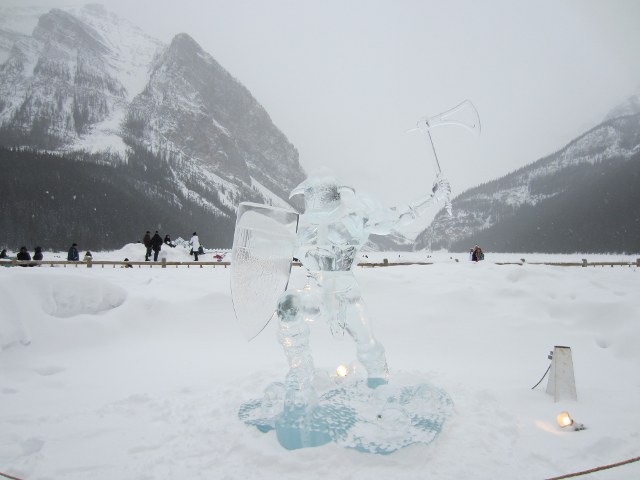 The winning ice sculpture. The photo doesn't convey just how perfectly finished it is. 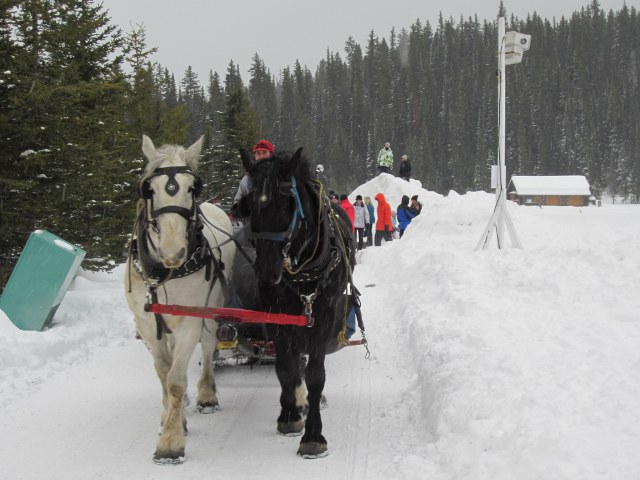 Horse drawn sleigh rides were available for those that wanted to explore the trails without having to walk (they were a bit pricey though). 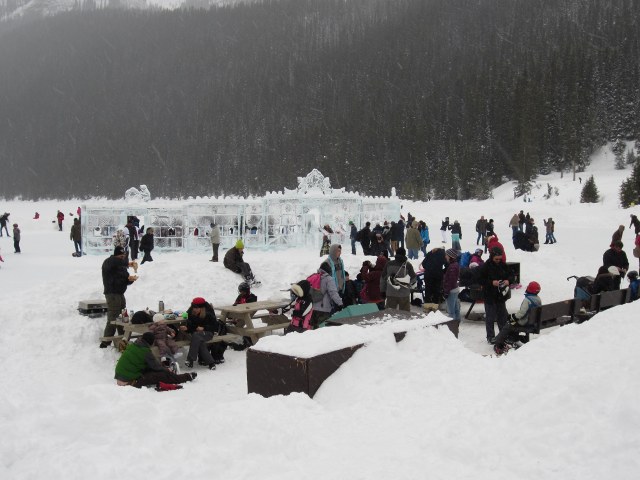 Lake up your skates on the benches around the fire pit right on the edge of the lake. Cubbies for your street shoes are there too, just like any respectable rink-side locker room (this one just happens to be outdoors). 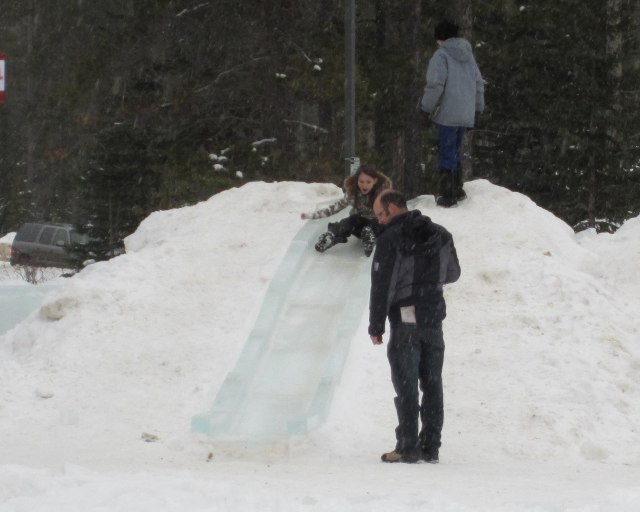 Back in the townsite, this ice slide struck me as genius.

Another panorama taken from some ways out in the lake. The surface looked to get a bit soft in places, so I wasn't about to venture out more. Click photo for a larger version.