Well, almost everyone. Not sure that there is a ton for non-skiing sightseers, but everyone else has terrain for days. Fernie has some of the most extensive green runs I have seen anywhere, something that is often lacking at other resorts. But there are no shortage of blues, blacks, and doubles too. A good mix of alpine and subalpine delivers the best of both worlds to advanced skiers, with fantastic tree skiing plus a decent helping of chutes and alpine bowls. Unfortunately much of the alpine is serviced by the brand new Peak chair, and there was near zero visibility on the top part of the mountain, so all I got out of the alpine this day was a single vertigo inducing run through the fog.

But I’m getting ahead of myself. First I had to get there. I reluctantly left my shore power and WIFI at the RV park access early in the morning to get to a nearby insulation shop, cleverly named “HIgh R Expectations”. Being the slow season for them, I was able to get a next day appointment to have the underside given a coat of spray foam insulation. When I had thermal photos taken of the RV back in Vernon, the floor looked like the likely candidate for the biggest heat loss, so I was hoping this operation would make a big difference, especially given the $450 price tag. I got a little extra value out of the visit as they took their router to run window frame channels in the insulation board that was to block out my bedroom windows. I also took the exquisite luxury of time in a heated shop to throw some insulation behind the tail lights, which were massive heat holes.

After that, it wasn’t a long drive to Fernie along the Crowsnest highway. The ski area itself is just a couple kilometers off the highway. When I arrived at the base the very nicely placed RV park came into view, but unfortunately I wouldn’t be staying there. Fernie offers season long RV parking only, Overnight parking is also not allowed as a rule, which is a bit sucky. However I would seem to have caught parking staff on a good day and was given permission to stay at the back of the farthest lot (bit of a walk) for the night.

I woke up to heavy cloud sticking to the top of the mountain, but the majority of the vertical was perfectly clear. Only a dusting of snow had fallen overnight. Add this to several days of no snow and this was looking to be a groomer-only day. I quickly found a mountain host to ask about tour time and got a bit of a shocker: Fernie hosts don’t do orientation tours anymore. Ski School does them instead, for a fee. Boo. Why ski school departments (not just at this hill certainly) think that free orientation tours are taking business away from them I will never understand. Someone who wants a quick show around the mountain on primarily blue runs and someone who wants a ski pro spending the day touring them around and offering ski improvement at the same time, are not the same person. I did however get some good info from my excellent hosts Dave and Jeff and tagged along for a couple runs while they did their duty of giving directions to people scratching their heads at a map (people really aren’t very good at maps in general, and alpine ski maps tend to be particularly difficult beasts with their three dimensional nature).

Fernie is definitely a case of segregation of areas making the place feel bigger than its 2500 acres. The five bowls/valleys Fernie offers are entirely distinct from each other what with them all being lined up next to each other. The only time you get a chance to glimpse both is when sitting right on one of the ridges, but most of the time each one is its own world. Thankfully, each world is sufficiently large that it has many lines to offer, rather than just feeling like a little nook. Well, with the possible exception of Siberia Bowl, which is fairly limited.

The trees at Fernie are pretty fantastic. Almost everywhere I looked they are spaced just right, and given the volume of such perfectly spaced trees, I can only assume that it is natural, not hand thinning.  It certainly made me wish for a nice fresh dump of snow. Actually, there was plenty of untracked snow in many of the trees, but a thaw/freeze cycle several days earlier had left it not nearly as enjoyable as it looked.

Fernie, like everyone else in eastern BC, hadn’t seen new snow for a few days, but it was weathering it quite well. The groomed runs were in pretty good condition, with scraped hard(ish) pack only realy showing its teeth late in the day in the busier areas. Off-piste varied, but for the most part what remained of the power that fell a week or so ago was just soft enough to be somewhat enjoyable, though not nearly what it could be. Given how long ago the last dump came, I was surprised to see so much lightly tracked snow. A testament to the amount of advanced terrain at Fernie.

The base area does a good job of maintaining some character, with plenty of old school log and wood building. Somehow they strike a nice balance between the big base area necessary for a major resort, but a style that doesn’t come across as big resort commercial. The giant ski poles add a touch of light heartedness too.

Of course not everything about Fernie is big resort spec. For one thing only 2 of their 7 chairs are high speed. Even the brand new Peak chair that went in earlier this winter is fixed grip. I can’t say that was ever an issue however. Being a weekday I never came across any lines and none of the chairs felt particularly slow. Perhaps more important, the chairs are arranged pretty well, such that every chair offers a good ski back down, something which is surprisingly uncommon at most resorts. Some of the chairs appear to overlap a bit judging by the map, but generally they service a different face of a ridge.

So does Whistler have something to worry about with Fernie? Yes and no. Fernie’s excellent mix of terrain for different abilities of skiers certainly trumps what WhistlerBlackcomb has to offer (I’ve always thought we were woefully short on green terrain, especially if you discount the green cat tracks). For a blue or black skier there is plenty of terrain to keep you busy for a week visit. The snow, like all interior hills, tends to be lighter. But that is where the outright advantages end. I’m told the upper hill is frequently in thick clouds, meaning the alpine experience is limited. While the village is charismatic, not everyone is going to prefer this style of village. It certainly doesn’t have the dining and nightlife options that Whistler has. And like most of the resorts in this area, the trip (from Calgary airport) is a big of a haul and prone to difficult road conditions. Suffice it to say though, Fernie is worth a visit.

My visit was unfortunately done however, and since Fernie isn’t RV friendly (except for the full season spots, which is great if you are going to be there often) I made a quick stop for groceries and kitty litter (I hear it makes for a great traction agent if you’re stuck… tho so far I haven’t been) in town, and headed back on the highway till I found a cleared area next to the tracks and little else where I could run my generator to my heart’s content. Funny how I love these little out of the way places, even with a loud train rumbling by every so often. 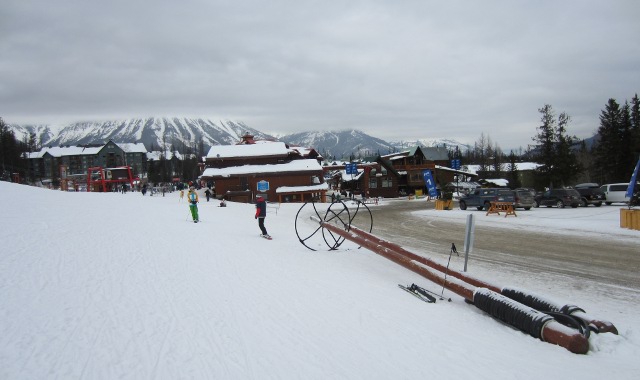 Fernie's mountain village at the ski area base. No, the novelty poles are not just close to the foreground, they are that big. 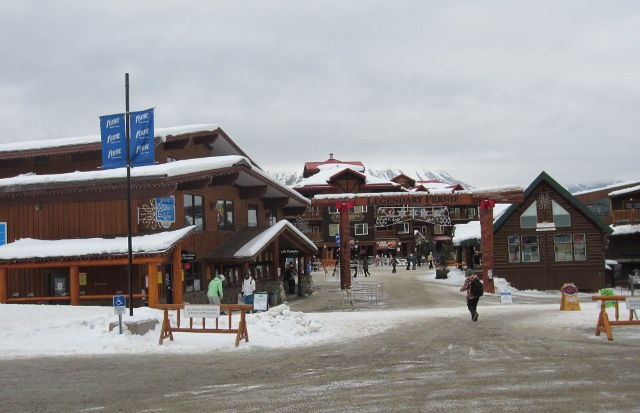 The main entrance to the village, which is quite nicely done with a good sense of authentic character. 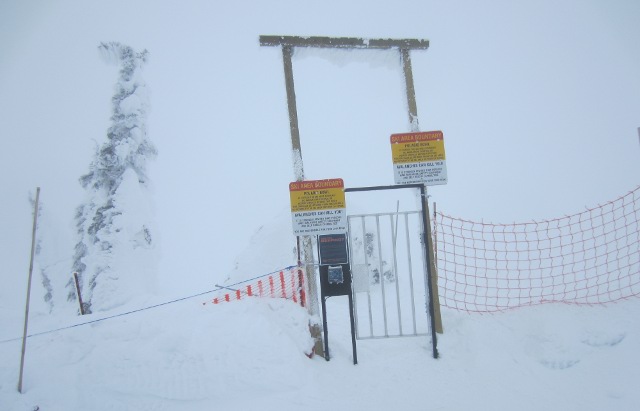 Electronic backcountry access gate. Only opens when it detects that you are wearing an avalanche beacon.