I left Apex and made a run north, spending the night in another stalled real estate development high up on the Westbank ridge. Being up on an exposed ridge the wind did a good job of smackin’ me up a bit, but nothing like at Crystal a week before. Of course, first I had to spend money I couldn’t really afford getting a new camera at an electronics shop that was open late, as I found my phone’s camera woefully inadequate, and the pocket camera I had had a damaged lens. I also had calculated that I would be needing WAY more storage for all the photos and video I was taking, so an external hard drive was needed. Just my luck that the Thai flooding sent the prices of hard drives through the roof (although the plight of the Thai people is probably a bigger issue than my having to spend an extra $50). The next day I made a stop at an RV dealer to see about some LED bulbs to help get a bit more out of my batteries. Although I’m not a huge fan of LEDs for many household applications, they work real well in an RV compared to the massively inefficient halogen bulbs normally used. I was also hoping for an easy fix for the very noisy, rattle-tastic furnace, but the answer seemed to be a new $450 furnace unit. Tempting, but I was already over budget and under-income, so I’d have to see if I couldn’t improve the rattle myself. Shopping done, I went to visit relatives living in Kelowna for the evening.

First thing next morning, I set off the for hour’s drive to Big White. Under an hour for most people, over an hour for my decidedly lead-free foot on the RV gas pedal. I’ve been to Big White once before, some 15 years earlier so I expected some things to have changed, and the first was the parking lot and lift some 10km before the main village. 20km less driving over somewhat bumpy snow covered roads was most welcome, so I stopped at use this new access point, one of a few new chairs that went up since I last set eyes on the place. The new chair is fast. Easily the fastest chairlift I have ever sat on. Good thing too, as it is a long ride.

I arrived at the top to a beautiful sunny vista. Perfect weather this day, rather cold but uninterrupted blue sky. Cold enough that when I accidentally ended up back at the bottom of the chair instead of on the village side, I didn’t mind too much since it allowed me to stop and switch to the warmer mitts. However it did mean by the time I got to the main village, I had missed the orientation tour, which only happens once a day at Big White. It took me yet another lift to get to the village too, as the place is confusing.  It’s not that the signage is bad, but that there are effectively four bases, plus some of the chairs seem to overlap. It almost seems like there wasn’t a masterplan when it was developed. It is a fairly big ski area too, which combined with a face that has several ridges and valleys, means you can’t simply stand at the top and see everything.

The village, which sits part way up the mountain, a feature I haven’t seen elsewhere, has grown alot since I was last at Big White, in size and in level of finish. The fairly plain older buildings have been supplemented with a host of new hotels and shops, styled to look more European. The village felt quite animated, partly the result of the place being somewhat busy despite being a Wednesday. Quite a contrast to Apex a couple days before. It would seem to speak to Big White’s efforts at becoming a destination resort paying off. The new section is all ski through also, like Whistler’s pedestrian village but with snow replacing cobblestones. I really liked this approach and found myself wondering why Whistler doesn’t do the same. I certainly think it strengthens the winter resort/skiing experience. I suppose one reason would be that the valley in Whistler frequently doesn’t get enough snow to do so reliably. In any case, I thought Big White did has done a fabulous job of the new village. But the new amenities don’t end there. A short gondola runs between the village and an activity area farther down which offers an outdoor skating ring, ice climbing tower, mini skidoo track, a tube ride, and the bunny hill for beginner skiers and boarders. That, and RV parking which I’m told by Guest Services (who seem to be hit and miss with this question wherever I go) is $10 per night.

Having missed the tours, I set out to explore on my own. The snow was not fantastic this day, just my luck as Big White is known for light powder. Bug it wasn’t bad either. The groomed runs were in decent shape, and getting into the trees on the Black Forest side of the hill turned up some good snow, plenty deep, and reasonably soft. A touch heavier than I’d like through tight trees though. Off piste other than in the north side trees was frequently heavily wind packed though. I made my way around the hill, getting a basic grip on it all (not a trivial task with a place of this size with several angles), and finding a couple chairs not running this day, despite the decent visitor turnout. But then Lady Luck graced me with her presence. I got to the top of the alpine T-bar, which accesses the peak and the far side of the big back bowl, which is certainly their most extreme terrain, with the intention of hiking to the peak for a panorama. I asked one of the patrollers there if a hike up for a photo was OK, only to be told that they were just opening the area, and with that she removed the fencing. Blue sky and fresh snow from a couple days back that had not been opened till now. Niiiice. I made the hike to the top, perhaps 10 minutes or so, and soaked in the view. Big White is certainly among the tallest peaks in the area, so you get quite the view in all directions of the surrounding peaks. Seems like a good chunk of BC is nonstop mountain ranges. The view having been absorbed, I took my fresh tracks down a decidedly iffy chute (partly due to it being real narrow with a real long way down on one side, and partly because the snow was sliding pretty easily… I could see why it had been closed), and further fresh tracks through the bowl below. Again, the snow was on the heavy side, more so than in the trees, and a bit wind packed in spots, but I was a happy camper. As much as I don’t like hiking for my turns (we invented chairlifts for a reason after all) I had to go back for a second run further down the far ridge. At which point I of course promptly lost a ski in a nice steal section in deep snow. Lucky for me th ski stayed put and didn’t submerge, so a slog back up through the thick snow got me back on track.

At this point my legs were pretty tired and the lifts were closing, so I took the long run back down to Gem lake, and the hour’s drive back to Kelowna. This evening I would park at a friend’s place, who being an RV owner himself even had a flat spot and power ready for me. Owen is one of those friends who you always think you should see more of, being a very comforting soul and genuinely nice (but no nonsense) guy, but the distances seem to preclude that from happening. I’ll have to stop making distance an excuse for seeing people I want to see. That and work. Lousy excuse that.

Big White actually takes a bite at Whistler’s ankles if you ask me. They have plenty of terrain, including a good helping of alpine, have a reputation for good snow and good weather, and have clearly put the money and effort into making this a destination class resort with all the amenities and high level presentation. It seems to be working given the number of tourists I saw and talked to on the lifts here. It is of course significantly smaller than WhistlerBlackcomb, but still good for a few days’ skiing before you would start feeling like you are recycling terrain (assuming good conditions). It isn’t especially hard to get to since the city of Kelowna is nearby, though certainly no-where near the international ease of access that comes from being less than 2 hours from the Vancouver airport. Ultimately Whistler retains its crown but it certainly has a peer in the royal court of the ski resort destination market. 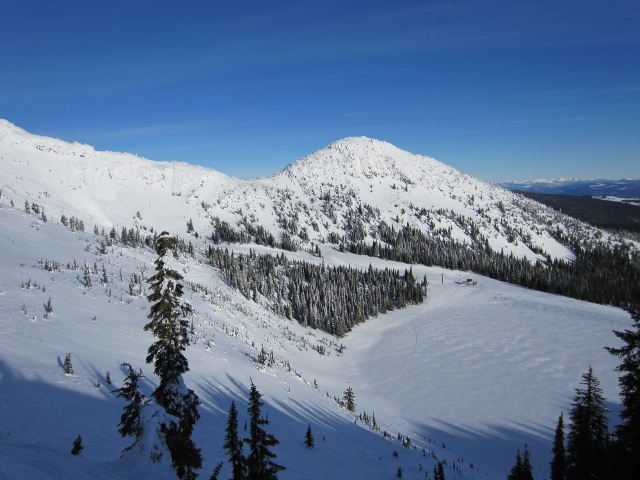 The far ridge of the back bowl and the lake at its bottom. 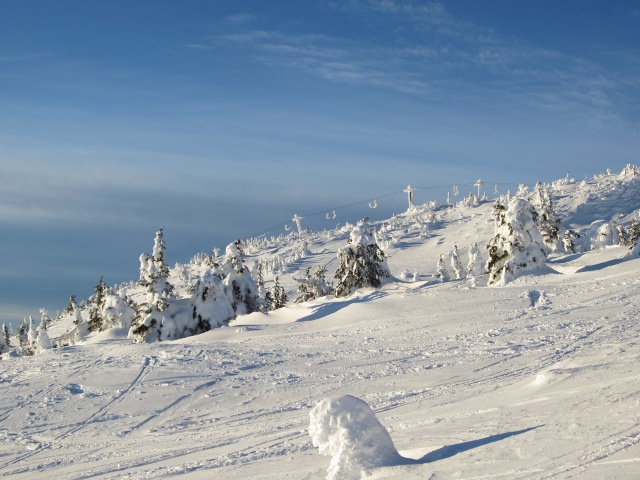 The type of image that I always seem to see of Big White, snow covered alpine scrub trees looking rather otherworldly. The closed Falcon chair in the background, decidedly encrusted in windblown snow.

Panorama taken from the beak of Big White. You can just make out the lake seen in the first photo in the middle. Click to view full size. 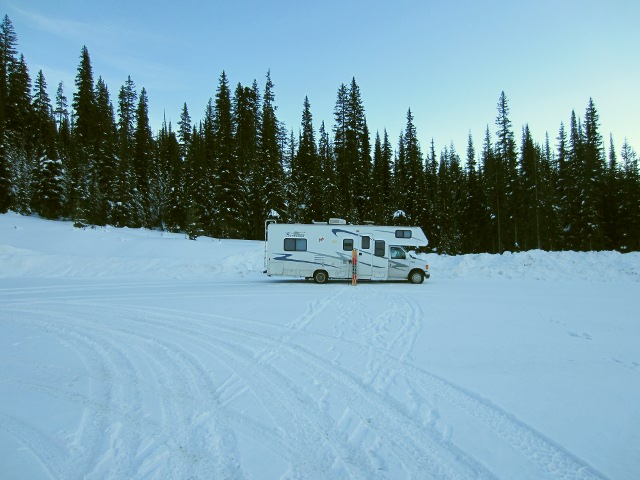 Not many cars in the Gem Lake parking lot.